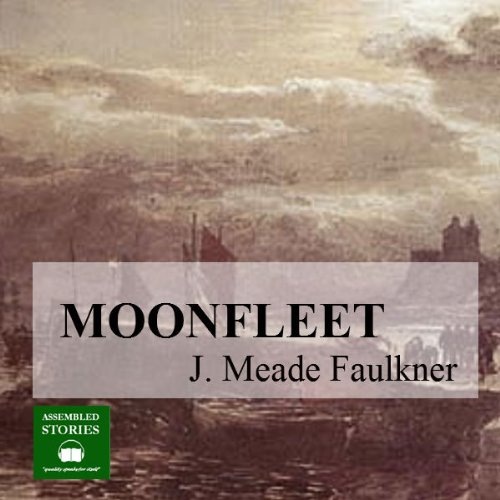 A tale of smuggling and mystery on the Dorset coast as told by John Trenchard, a boy obsessed with discovering the secret of Colonel 'Blackbeard' Mohune's hidden treasure. One night, trapped in the Mohune family vault beneath the church, John finds a locket round the Colonel's neck which contains verses from the Psalms of David. What could it mean? Elzevir Block, landlord of the local public house, who has lost his son in the contraband wars, befriends John and together they struggle to find the secret of Blackbeard's buried wealth. It is an adventure story full of action and misfortune spanning many years, two different countries and ending with a message to us all.

About Assembled Stories: Over the years the national press have reviewed Assembled Stories titles as "excellent", "remarkable", "entrancing", "superb", "magic for sure", "masterly", "wonderful", "a class act" and "a splendid example of audio at its best".

What listeners say about Moonfleet

Wonderful to hear this book.

I was first forced to read this book in grade 9 as part of English. It was of all the books I read for English in high school the only one I felt at the end I understood why we had been assigned to read it.

It is an adventure story of the same ilk as Treasure Island. Christian values and practicals are part of the story but not critical to understanding it. More importantly it is about how we view ourselves and the choices we make. I would say that any teenager would likely have a good chance of enjoying the story.

I took a chance on Moonfleet because some compared it with Treasure Island. Though they share a similar tang, ultimately I found myself enjoying this story quite a bit more. For though it contains a fair amount of action and adventure, it's also much more. Time just flew by as Peter Joyce brilliantly narrated each character. He also managed to keep up a high energy for the action that does take place.

I found this story slow and many of the characters loathsome. The likeable characters suffer cruel twists of fate. Did not strike the adventurous chord I was looking for.

A classic of its type

A rollicking tale of smuggling, adventure and growing up. Of course, by our standards, the moral underlay about greed and generosity is rather heavy handed and in your face, and the plot depends on both a ludicrously improbable set of events to set up the second half and then an equally improbable coincidence to create the resolution. But the themes of loyalty and the choices we make affecting others are actually rather well done. The narration started out feeling a little blunt but soon grew on me - it allows the emotion to come over from the words without excessive dramatisation.

This is a well put-together story with a cast of engaging characters and scenes that made me smile and groan. There were plenty of ups and downs to keep me interested. I suppose that it's a sort of action adventure but the friendship of the main characters was what I felt drove the story.

I have to thank Chris de Burgh as I got this downlaod as a result of listening to his 'Moonfleet and other stories' and I'm really pleased that I did.

Moonfleet - listening to this was time well spent

Read this as a young girl in school so was a real pleasure to hear it again at 62 yrs old. Still as brilliant as I remembered it.

I originally bought this book for my grandson, but found myself completely gripped by this great moral tale. It’s a story i know i’ll listen to again & again.

I read Moonfleet when I was at school. It was one of the set texts for English Literate when I was in the fourth year which I think approximates to year 10 in today's system. I liked it at the time as it was an easy story to read and the protagonist John Trenchard was a similar age at the beginning of the story as I was. It is all jolly good stuff too with a background of smugglers, lost treasure, cryptic clues and the curse of Blackbeard.

The plot is, of course, a bit far fetched and silly but that does not matter as the characters are sufficiently strong to allow the reader (or listener) to suspend belief and let themselves be taken along for the adventure. It is the story of friendship and morals and the good old fashioned concept of good triumphing over evil.

This is just as much fun 40 years from reading this for the first time. A special mention should be given to the excellent narrator Peter Joyce who has the Dorset accents down to a tee. Brilliant stuff.

Great story of smugglers and a diamond. Grips the listener from start to finish. Prepare to be spellbound by this story of 18th century intrigue!

a noble story and beautifully read. Be prepared to weep exceedingly in the last chapters.

An enchanting and very engaging story

A very exiting story beautifully narrated in the dialect of the time and region. Listening to the story while staying in the area made it even more magical for us. Highly recommended.

Great story for young and old . A classic story of adventure , smuggling and love.