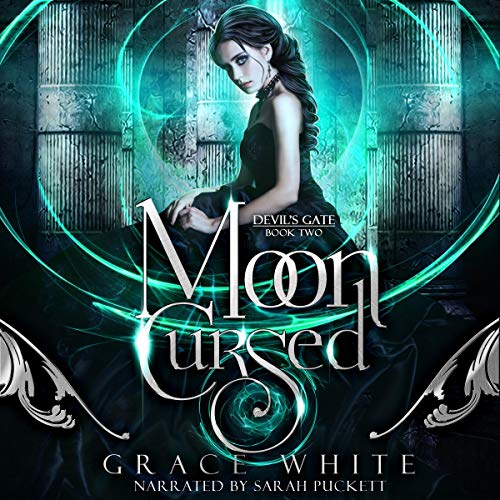 By: Grace White
Narrated by: Sarah Puckett
Try for $0.00

Unify the species. End the war. Defeat the dark power.

After learning the truth about her destiny, Celeste La Fleur has to trust her companions Laken and Lucas to help her rescue Gage from the vampire, who wants to reign terror over Devil’s Gate.

But Dahlia Dubron isn’t the only one who wants to hurt Celeste.

With her list of enemies growing, tensions rising, and emotions spiraling out of control, Celeste finally embraces her responsibilities while trying to avoid losing herself in the process.

Moon Cursed is the second book in the Devil's Gate trilogy, a dark and sexy reverse harem urban fantasy series featuring a kick-ass heroine, plus a brooding vampire, an alpha wolf, and a cunning faerie you won't have to choose between.

Book 2 in Celeste's story was just as good as book 1. Being the regent, she has to unite the species and i enjoyed how that part of the story unfolded. The narration was a good and sounds exactly like I pictured Celeste.

If you’re like me, and you can’t stand a cliffhanger, so you wait for a series to be concluded till you start to listen. Then I highly recommend you don’t read this book until the third one is released. Because Damn I’d pull my hair out if I had to wait!

Now onto this book. Talk about the weight of the World on one shoulders LOL. Cc seems to be damned if she do and damned if she don’t. Now “mated” to two of her men, The pressure only builds! I am hoping that this sex, gets a little bit more adventurous I guess is the best way to put it LOL. But even if it doesn’t it’s still damn good. I would write more, but I never know what to say without giving a spoiler, and I have to start book 3 Before I lose my mind!

This book continued to build the characters and world into even more believable place that could exist in TRW. I was shock at how much I enjoyed falling into the story. It was left perfectly for your WANTING the final book, and I highly recommend kicking back and enjoying the story as it comes to life with a really good narrator.

I found this story very enjoyable, it ended with a bit of a cliffhanger but a HEF so that is a plus. I would definitely recommend this book

Unify the species...
End the war...
Defeat the dark power...

A fantastic sequel to a wonderful series. Thrilling and enjoyable. So dark and so deliciously good.

Narration was so brilliant.

Yay! I loved this book. Celeste is becoming stronger each day. This book starts where the last one ended. Celeste needs to find a way to get Gage back while dealing with the pull towards Laken and Lucas. I loved this book because she settles her relationships with 2 of the 3 men. This book leaves off on a major cliffhanger and I m dying for the next book to find out what happens!!

As always Sarah Puckett did an amazing job with the narration.

love this series and this author. Also one of the best female narrators out there!
#audiobookobsessionreviewer

Talk about latching on to every single word. I was at the edge if my seat for this one. I loved the story and cannot wait for book 3!
Sarah Puckett did an awesome job with the narration. She really brought the characters to life!
#AudiobookObsessionReviewer

🔥 Getting steamy up in here! 🔥

OMG I just loved this book, Blood Lust was pretty intense, but this one out shone it, I was sucked in from the beginning and finished it in one sitting it was just good to stop. Three hot alpas, lots of steamy action that just sizzled it melted my socks off. Charlotte is struggling to unify the packs, but does all the trouble come back to the same source?! Sarah Puckett was phenomenal narrating this book, giving the characters life, I can't wait to start book 3!

Moon Cursed is the second book in the Devil’s Gate series and starts right where the Blood Lust ended. We get a bit more background information on the wolves as well as the turmoil with Lucas. I really enjoyed this series and can’t wait to see what happens next!

My Thoughts on Moon Cursed

This was an amazing continuation of this series. I loved watching the development between Celeste and her men. Things were really changing and there was just so much going on, but in a good way. The only not so bright spot for me was that one of the relationships wasn't developing quite as much as the others and I found myself feeling bad for that character. Always called on to help, but always kind I'd on the edge of the actual relationship stuff. I really hope that changes in book three. Moon Cursed left things with a very exciting cliff hanger and I need to know what happens next.

Sarah Puckett is just fantastic. I love her narration. She's the kind of narrator who could get me to try new authors and some of my not so favorite romance tropes because I know at least the performance will be good. This story is one I know I'll revisit again later.

I really enjoyed this book great story line and the narrator did a great job, I would recommend this book. audiobook obsessions reviewer.

This is a brilliantly written tale with characters and a storyline which you get involved with immediately! The trials and tribulations are unusual and grip you emotionally.
Warning- cliff hanger!
Totally awesome narration!

Moon Cursed By Grace White is a Reverse Harem Paranormal Romance that I listened to on audio narrated by Sarah Puckett.

I love Grace’s books! They always leave me begging for more. The story does end on a cliffhanger so I cannot wait to dive into the third book Dark Poison.

Sarah did an amazing job narration. I absolutely love everything Sarah has narrated on. She knows how to bring a story to life.

I would recommend this book to anyone who loves Romance, Paranormal, or Reverse Harem books.

i am loving this series! yet again another cliffhanger! cannot wait for the next book to come out!

This series is so addictive, the intrigue keeps building, the chemistry among the characters is growing and you keep wanting more.
Sarah’s narration fits this series perfectly.

This is a Reverse Harem, PRN book. I didn't read/listen to the first book, but will definitely have to go back and start from the beginning. The characters are engaging, and the story and addictive.
Sarah Puckett is at the top of my list of favorite narrators. Her audio performances always pull me right into the story, with all the characters.