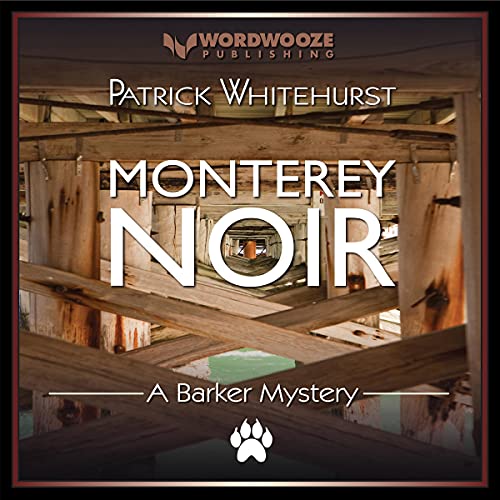 By: Patrick Whitehurst
Narrated by: Theo Holland
Try for $0.00

A homeless hero with the crime-solving skills of Sherlock Holmes.

Not every hero lives in a mansion or works from a smoky, hard-boiled office. Enter Barker, a mysterious man with no memory of his past. Ferociously handsome and acutely observant, Barker makes his home under the soggy planks of Old Fisherman's Wharf along California's foggy Central Coast. His closest friends are an assortment of stray dogs, ranging from a large Rottweiler to a tiny Shih-Tzu, who live with him. Adventure and intrigue have an uncanny knack for crossing Barker's path.

In this first entry of the series; Bernie, Barker’s sole human friend, bestows his makeshift home upon the man and his dogs just before dropping dead. It’s up to Barker to honor Bernie’s last wish, to atone for his sins, which doesn’t prove to be an easy task. Meanwhile, forces are at work in other parts of the fog-swept city, which will lead the homeless detective and his dogs to a deadly confrontation in the heart of Monterey Bay itself.

What listeners say about Monterey Noir

Monterey Bay Barker has a friend Bernie who last promise he wanted him to do. Without memory or skills, and dogs seem to be his friend. He undertakes to keep this promises. Narration was good as was the flow of the story. Given audio for my voluntary review

This story definitely grabs your attention. In Monterey Bay Barker is a homeless man with no memory of his past but with has impressive crime solving skills. His only friends are a pack of dogs and and Bernie, another homeless man. Bernie has asked Barker for help before his last dying breath. Many things try to deter him but he is nothing but determined to help his friend and other forces that are at play in the Bay.

The narrator Theo Holland did an amazing job at bringing the characters to life.

This was very entertaining. It's hard to imagine someone as selfless as Barker, and so perceptive of their surroundings. The dogs stole my heart. I voluntarily listened to a free copy of this and am giving an honest review . The narrator did a good job bringing it to life.