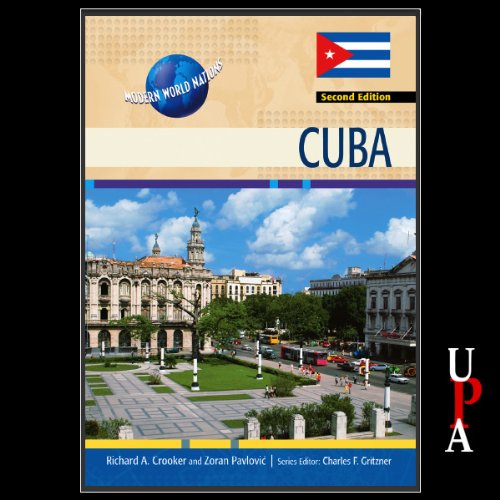 By: Richard A. Crooker,Zoran Pavlovic
Narrated by: Roxanne Hernandez
Try for $0.00

Since Fidel Castro staged a coup and assumed power in Cuba in 1959, the United States has been obsessed with this small island nation, only 90 miles south of the Florida Keys. America's fixation on Cuba has only grown due to the large waves of Cuban immigrants and Castro's larger-than-life persona. But because of the country's isolation, the island and its people have remained a mystery.

Cuba is among the most literate countries in Latin America, with a literacy rate of 99.8 percent. Its health-care system compares favorably with those in developed nations, and life expectancy ranks third in the Americas, behind only Canada and Chile, and ahead of the United States. In 2006, Castro transferred power to his brother, Raul, who has promised to remove some of the restrictions that have limited the average Cuban's daily life.

This revised edition of Cuba takes listeners through the country's storied history, its people, and what the future holds for this island nation. It offers a solid introduction to the subject. The book is published by Chelsea House Publishers, a leading publisher of educational material.

The best aspects of this audiobook were the bite-sized explanations of historical developments in Cuba. The worst aspect was the unashamed (perhaps even unconscious?) pro-capitalism pro-american bias. For example: "Capitalism is a system in which reward is based on skill and effort".
REALLY? - which capitalism would that be because it sure isn't one I recognise? Are the rewards of bankers higher than doctors and nurses because they have/need/utilise proportionally more skill and effort?
So, put aside the political bias (but do listen out for it - it's quite funny really) - if you're looking for an audio book with history and facts about Cuba - well - this is the only one could find.

It's out of date. Cuba is riddled with American tourists now. Cubans are buying and selling houses and running businesses now. There is no shortage of petrol and they have an oil field.

The author could have wondered a little about their own bias towards capitalism. But maybe they get their world view from Fox News.

Did Modern World Nations: Cuba inspire you to do anything?

We were just on our way to Havana and I wanted more info, it was good to have more of a picture about the role slavery played in the Islands development. And I hadn't realised previously how dishonest Kennedy was.

I’m just learning about the topic and finding it to be enigmatic. Narrator did a good job, especially with Spanish language pronunciation. The book provided information about a wide range of subjects from geography to Cuban culture. Its conclusions seem reasonable, but it eschews any truly controversial statements. It’s a bit behind the time as it does not include any information on the diplomatic advancements of the last few years.