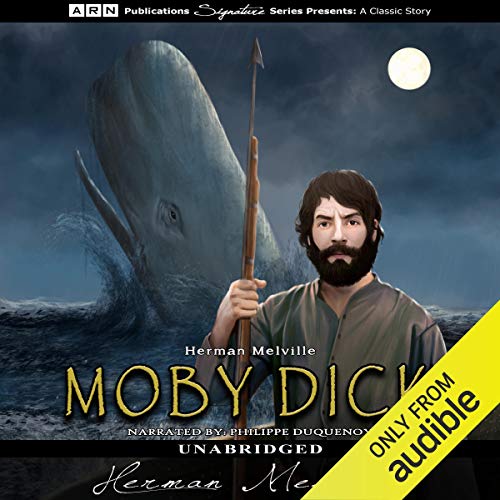 By: Herman Melville
Narrated by: Philippe Duquenoy
Try for $0.00

Ishmael, a sailor looking for his next adventure, and his friend who happens to be a former prince, sign up to join a whaling ship in Nantucket. The morning before they set sail on their voyage, many ominous signs of what the pair's fate may be are seen and heard through sermon and prophecy as the two friends ignore the warnings and make their way to the docks.

Soon into the trip, the one-legged Captain Ahab announces that the whaling adventure is really a hunt for one very specific large, white sperm whale that took the Captain's leg and sunk his ship. Ahab also announces a contest, a gold doubloon for the first man to spot Moby Dick, the giant whale they are seeking. The crew pursues several whales that they believe could be the infamous Moby Dick, but they continue to turn up empty handed.

The sailors carry on in search of Moby Dick, among many other ships. Surviving through typhoon seas, they chance upon a boat that has been ravaged by none other than Moby Dick. The captain of the destroyed boat tells Ahab that the whale simply cannot be killed. Nevertheless, Ahab's crew sets off after the whale and finally spot him. After a three-day whale chase, Ahab's quest for vengeance turns into a tragedy for everyone involved.

What listeners say about Moby Dick

What a symphonic shower of amazing delight!
I've been reading sea stories and sparked "why not the the Bible of salty yarns ".....Moby Dick of course.
I tried reading it as a kid , I saw the Gregory Peck movie but Audible had to be considered and it did not fail to raise me out of my shoes.
Herman Mellville, what an other worldly scribe: non pariel.
I am rung out....what an aural feast.
What next?

One of the ALL TIME greats

Just about everyone has heard of Moby Dick (and the infamous opening line "Call me Ishmael." ) which is one of the greatest American classics of all time. The story is one that gets you drawn in, and doesn't let you back out until the end. Herman Melville's masterpiece is one that has withstood the test of time and changing generations. The narration in this version is terrific and only compliments Melville's greatest work. Wonderful book to listen to for any age group.

5 Stars in every sense!

this epic novel builds slowly to a riveting and cataclysmic end. I would read again

SUPERB IN EVERY WAY

Although not recommended to the impatient, lovers of literature, poetry and philosophy will be richly rewarded for their time. Additionally, they will learn an extraordinary amount about seafaring in general and whales and whaling in particular. This is a profound work about what it means to be human and it directly addresses important questions about free will and the nature of reality itself. I cannot think of an American work of fiction than can come close. Should be on everything thinking man's bucket list.

Comedy, tragedy, an insane captain trying to kill a homicidal whale responsible for his missing leg and mind. What more could you want?

loved it. must listen to again .felt like I was there hunting for Moby dick

If you could sum up Moby Dick in three words, what would they be?

The whale, icon of our delicate ecology, wins.

Have you listened to any of Philippe Duquenoy’s other performances before? How does this one compare?

This performance worked for me because of the narrator's youthful exuberance, which perfectly captures Ishmael's charming sense of wonder, and made it a delight to plow through this very very long book.

I doubt I could make it through the print version so I'm really glad I tried this unabridged audio version.

I really struggled to finish this one. The writing is so old it's a bit hard to follow, and this particular performance could have conveyed more emotion. It felt a bit monotone at times. Finally got through it though, and I can understand how it's a classic.

I read Moby Dick 30 years ago and loved it. Now hearing it just made it all the better. I hadn't remembered how funny it is, and the reader brought out the humor wonderfully. The audible version also brings out Melville's beautiful prose. The performer is a perfect Ishmael, as well as rendering an excellent Ahab, Queequeg, etc.

Soaked in metaphors and visual imagery, ‘Moby Dick’ is a masterpiece of American literature that is immersive, though can be difficult to get through at times. A core of any American literature canon, this particular version of the book is soothing to listen to; the voice of the narrator adds to the atmospheric nature of the novel.

Melville accurately captures life on the North American coast, drawing in readers with his fascinating and in-depth characters. Though the plot might not always drive forward at every moment, Melville has a way of keeping you engaged in the story through the world that he has crafted. For readers of good literature, this book is an absolute must both to keep on your shelf to keep going back to time and time again.

Though Melville has written many great works, this is the piece that is often upheld as a masterpiece of American literature. Philippe Duquenoy was the right choice as the narrator, his slightly gravely and rough voice perfectly reflecting the ambiance that Melville has created.

Long in the tooth

Goes on a bit to much for me, a lot to get through before the good stuff

Narrator has done very good job. Excellent classic story should be listen to at least once.