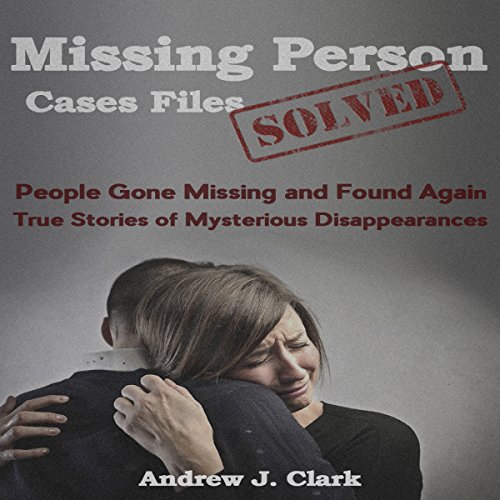 Vanished into thin air. Disturbing cases of people gone missing and being found again. Listen about their mysterious and sometimes chilling journey.

Missing people are far more common than you might think. Every year, around the world, hundreds of thousands of people vanish into thin air. Usually, they have simply been involved in a freak accident that has led to their death. Sometimes, they vanish on purpose and don't wish to be found. On very rare occasions, there is violence at play and the person has been deliberately removed from the public or even killed. In this audiobook, we will be examining the various circumstances in which people happen to vanish. These circumstances can vary from elegant plans of their own design, to freak accidents that result in memory loss. In some cases, we will find that there is a malicious party at play, and a far greater crime to be solved. But in every single case, we will learn of someone who vanishes before being found again.

So, listen on to discover the strange and mysterious events which can drive people away, as well as the emotions and motivations that lead them to come home. With so many people disappearing across the planet, the stories of those who are able to come home are inspirational, fascinating, and, in some cases, almost unbelievable. In this audiobook, we will learn the true stories of the lost and found, the real life events which see people arrive back home, after most people might have given up hope. Listen on and discover just what it takes to come back.

Here are some of the cases that you will find inside:

very interesting storytelling. and informing of people missing and found. I like stories when people are found so it doesn't just leave you hanging not knowing what happened to people great idea great story wonderful narrator well written