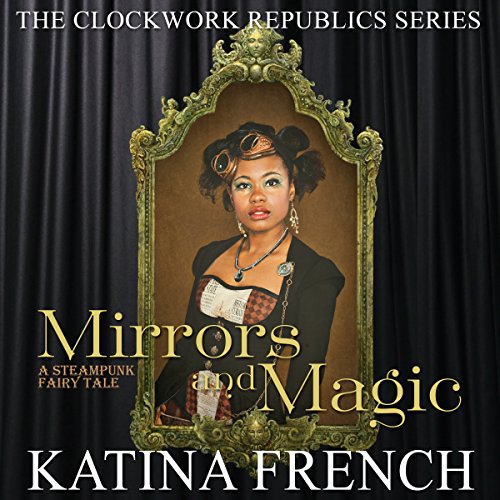 By: Katina French
Narrated by: Hollie Jackson
Try for $0.00

A Princess in Exile.

Neve Bianchi has always lived in the shadow of the big top. Haunted by her father's death, famed magician Giovanni "The Magnificent" Bianchi, she lives in the background, forgotten and alone. The vanity of the circus' new featured act, Bella Venezia, drags the entire company into decline.

But magic is in the air. Neve makes a discovery that could change not only her fate, but the fortunes of everyone in Lang and Perrault's World Famous Circus. Can she trust Brendan, the charming Prince of Blades? Can she conquer her fears and bring the magic back?

Mirrors and Magic is a steampunk Snow White tale, set in a world of alchemy and mechanical marvels.

What listeners say about Mirrors and Magic

The Princess Of The Circus And The Evil Queen

Would you listen to Mirrors and Magic again? Why?

Yes! It is an amazing series and I really enjoy each foray into this world. I can't imagine not revisiting each story many times. This was, by far, my favorite installment of this unique series.

Hollie Jackson brought each and every character to life vividly, but I have to say Neve was my favorite character! She grows from a scared little girl, afraid to lose her place with her adopted family, into a strong and vivacious woman at ease with herself and unafraid of anything or anyone :) The accents were truly amazing and the best I have heard so far from any voice actor on Audible! I can't wait to hear what she does next :)

This book made me laugh alot more than I expected it to! The animals were definitely unique characters and good for many laughs.

This series does not need to be listened to (or read) in order as it consists of stories just based in the same world and not necessarily connected to each other via plot or storyline. This is the third book written based in this world. I suggest listening to (or reading) Bitter Cold first though (as I did) because it seems to be the first book chronilogically speaking. I can't wait to listen to more!

Neve has lived with the circus for as long as she can remember. She lost her mother when she was very young and her father died in a tragic accident when she was merely 8. That was ten long years ago and now she is afraid her time with her adopted family is almost up. Her guardian, the owner of the circus, has been avoiding her. She has a secret she is reluctant to share with anyone... They might laugh at her... She might be terrible. And, of course, the reigning Queen of the Circus hates her with a passion. Her father was the greatest Illusionist that ever lived and she is not sure that his tragic life ending accident was truly an accident. She does what she can to keep the Circus running smoothly. Feeding animals, helping people prefect their acts, any odd job she can find, even though nothing is expected of her. Will she be able to stay? Or will her gaurdian kick her out after this season? Is the Circus failing? And if so, why? Can she do anything to bring it back to its former glory? Or is it already a lost cause? What really happened to her father? Could a man that talented really kill himself accident? Can she trust Brendan? Why does the reigning Queen have her so? Will she ever live up to her father's legacy?


***This series is suitable for mature young adult through adult listeners (or readers) who enjoy steampunk fantasy fairytales with a dash of horror, romance & plenty of action and adventure :)

Mirror, Mirror On The Wall and the Circus

Katina French again gives us a delightful retelling of a classic fairy tale. This time a steampunk version of Snow White using the setting of a down on its luck circus.

Lang & Perrault's World Famous Circus has gone steady downhill since the death of the Magnificent Bianchi despite the hard work of the owner Andrew Lang and Bianchi's daughter, Neve. That is until the fateful day when with the encouragement of Brendan, the Prince of Blades, Neve takes the leap from lackey to the center ring aided by the coolest magic wand.

And of course what can a retelling of the Snow White tale be without the evil Queen and the all seeing, all knowing Mirror.

Hollie Jackson does a really good job of voicing the characters and narration as well as giving us a look into the emotional side of each. She has also given Brendan a very dreamy voice.

For those who have read Bitter Cold (the retelling of the Snow Queen) you will get a little treat when you recognize a few of the audience members.

This audiobook was provided by the author/narrator/publisher at no cost in exchange for an unbiased review courtesy of Audiobook Blast.

I got a copy of this audiobook from Audible.com, it was sent to me by the author to review. This was a decent steampunk fairytale retelling. It was basically a retelling of Snow White set in a steampunk circus in an alternate version of the US.

As mentioned above I listened to this on audiobook. The narrator was okay. Ironically she did a great job distinguishing between male voices (many female narrators have trouble with this) but all the female characters sounded the same. I had a very hard time telling whether it was Neve or Bella talking, they both sounded almost identical. This is a book I would recommend reading versus listening to.

Neve’s father was a great magician in Lang & Perrault's World Famous Circus. After his death the circus started to decline. Neve is desperately trying to help Lang save the circus and is hoping some of her own magical abilities might help. However the current star act, the lovely but cold Queen of the Air, will stop at nothing to keep Neve from displacing her act from being displaced.

I enjoyed the circus setting and some of the clockwork devices throughout. I loved the addition of formulas and illusions that made up some of Neve’s magic act.

I thought the characters were a bit stereotypical and lacked some depth. Neve is overly sweet and seemed too naive to had grown up in a circus. While Neve does have some spunk, she was just too sweet, good, and innocent for a lifetime carnie.

The lead male character is known as The Prince of Blades. He is your typical "misunderstood rogue who has a sordid past, but really is a sweet guy" kind of male lead. Again he was okay to read about, but was a bit too good and his "sordid" past seemed a bit contrived.

The story itself was also very predictable with few twists and turns. It was just a very simple story, whose outcome was easily predicted from the beginning. The steampunk elements were pretty much limited to clockwork devices, airships, and some vague “formulae”. There wasn’t really any world-building around that theme.

The story is supposed to be a retelling of Snow White. While I thought it was an interesting effort, parts of the story felt like they were kind of forced into the Snow White setting (particularly the apple part at the ending). On the other-hand there were other parts of the story that were very cleverly done and really did a good job of paralleling the Snow White tale while still flowing naturally (for example Neve’s back story and how the Queen of Air was the evil Queen of the circus).

In the end this is one of those stories that was mildly entertaining and non-offensive. After reading it I thought "huh, well that was fine" but I wasn't blown away or dying to read more about this world or these characters. It's a quick and fun read, that is straight-forward and simple. There are some interesting elements and I liked the idea of retelling a fairy tale with a steampunk storyline.

Overall this was a quick and simple steampunk read. It reminded me a bit of Shelley Adina's Magnificent Devices series. I would recommend this book to those who want to read a steampunk fairy tale retelling. Just don't expect some elaborate story, this is a simple story with simple characters and a happy vibe.

What made the experience of listening to Mirrors and Magic the most enjoyable?

This was my first steampunk experience and because of Mirrors and Magic and I'm new fan of the genre. I was pleasantly surprised with how Katina took a fairy tale and made it a completely original. Highly recommend reading this book.