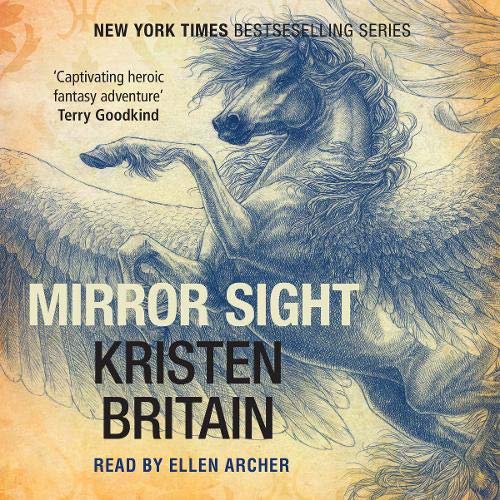 By: Kristen Britain
Narrated by: Ellen Archer
Try for $0.00

Karigan G'ladheon is a Green Rider - a seasoned member of the royal messenger corps whose loyalty and bravery have already been tested many times. And her final, explosive magical confrontation with Mornhavon the Black should have killed her.

But rather than finding death, and peace, Karigan wakes to a darkness deeper than night. The explosion has transported her somewhere - and into a sealed stone sarcophagus - and now she must escape, somehow, before the thinning air runs out and her mysterious tomb becomes her grave.

Where is she? Does a trap, laid by Mornhavon, lie beyond her prison? And if she can escape, will she find the world beyond the same - or has the magic taken her out of reach of her friends, home and King forever?

What listeners say about Mirror Sight

Great story as ways. However as with Blackveil the chapters are in the wrong order. After "Laurelyn's Gift" the chapter "Mirror Sight" will play but this should be the final chapter so just skip ahead and then come back at the end.

Audible have been notified.

The order of the chapters is wrong and mixed up which ruins the flow of the story.

fantastic book as always from Kristen Britain. however, some of the chapters seem to be in the wrong order but this is an audible issue, nothing to do with the fantastic stories of Kristen Britain.

Another great book by Kristen Britain

This book is different from the rest in the series in that it takes place in the future, following the event that closed off Blackveil.
Some complain that this book does not belong in the series, and that it was just a way for Kristen Britain to get a book out about something she was interested in at the time. But I think this is a great book, as long as you consider that she is not a particularly good writer of romance.

This is the first book I've listened to (while also reading the physical copy). I was not expecting anyone to have fake British accents, or worse, fake Scottish accents... I've taken a star off for that reason, but otherwise the narrator is great.

The chapters are all in order too, not sure what the other review is about.

story was fine but download or file support terrible. lots of file errors and missing data no sound

The final chapter of the book played out of order about an hour and a half from the end of the recording. The story was a bit of a tangent from the rest of the series too.

The off one in the series.

I love Kristen Britain. I love the Green Rider series. I hate this book.

the only part of the book worth reading was literally the last chapter, the entire story should not have been a continuation of the series but maybe a side story, I was confused as to why she abandoned the last 4 books worth of storytelling to go off on a steampunk tangent. hope the next one's better... oh and like the last book, the last chapter was out of order and played about 6 chapters early.