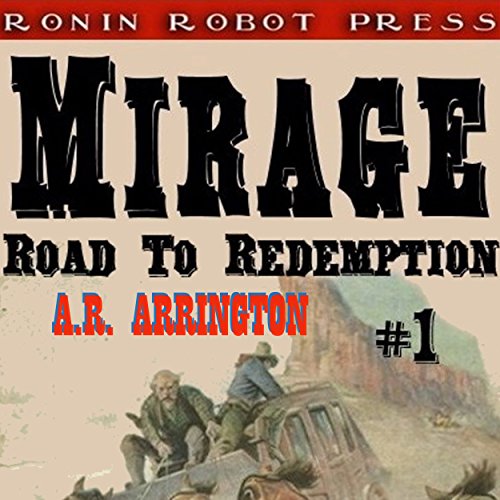 By: A. R. Arrington
Narrated by: Alex Zonn

Moss Partridge has just had a very rude awakening. The last he remembers, it was 1864, and he was a paroled Union soldier stopping off in Denver on his way home to his wife and child in Montana. Now it's a dozen years later, he's the town drunk in Mirage, Colorado, and he has no memory of those lost years. Something sure must have happened, because there are people trying to kill him and two Indian children who are following him everywhere he goes - and, apparently, deciding whether he should live or die.

one of those little gems that you do not expect

Moss Partridge awakens in Mirage and realizes that he has lost the last twelve years of his life. He used to be a Union soldier on his way home to Montana, to his wife and son, when something unknown happened to him. After losing his memories for the last twelve years and sobering up, Moss tries to go back home but he gets sidetracked in trying to know who he is and what he has done. During his adventures, he will meet two Indian children who will leave a present for him. How are are they related to his past?

This book is one of those little gems that you do not expect. The book is just over two hours and feels like an old western novelette. Arrington has worked well the intrigue to keep the reader watching out for any hints about Moss' past.

This is just the first book of a series in which I am sure Moss will suffer great changes and will have to repent from something horrible he has done. Will his wife be waiting for him? Could Moss live with what he has done?

The book has plenty of action, but also great depth, as this will be also a journey towards Moss' soul.

Alex Zonn was the perfect narrator for this story, and he really became Moss Partridge with his husky voice and accent. I have not listened to him narrating other books but his voice was the perfect one for a Western story, interpreting a somehow old ex-soldier and cowboy.

I will definitely want to listen to the rest of the series, and this book would have been perfect if the story would have been longer or we would have gotten more from it. I guess I don't like cliffhangers.

4 of 6 people found this review helpful

An Exciting Beginning to a Western Series

What made the experience of listening to Mirage, Colorado the most enjoyable?

Wow. This was a little surprise gem waiting for discovery

Which character – as performed by Alex Zonn – was your favorite?

Moss Partridge, Alex Zonn does an exceptional job with the narration of this short book. He nails the tone, the cadence, and the voices of this book and really brought it to life for me

Who was the most memorable character of Mirage, Colorado and why?

Wow. This was a little surprise gem waiting for discovery in my list of books from Audiobook Boom. I can't say I am a huge western fan but this series might turn me into one! I just hope the next book is longer. How often do you wish that?

Moss Partridge wakes up in a very awkward situation to a crowd of laughing onlookers. He soon figures out that he's been on a 12 year bender and immediately begins trying to rebuild his life and, most of all, get back to his wife and baby daughter. As soon as he leaves Mirage, he is visited by two Indian children that leave him a peculiar gift. As book one ends, he learns why he went on his twelve year hiatus from conscious thought and also, to a degree, figures out why the Indian children keep following him.

Alex Zonn does an exceptional job with the narration of this short book. He nails the tone, the cadence, and the voices of this book and really brought it to life for me!

I received this book for free from Audiobook Boom in exchange for an honest review.

An Exciting Beginning to a New Western Series

MIRAGE, COLORADO was an excellent start to a new western series and it was really good. We meet the protagonist, Moss, for the first time after he's been woken up from a long sleep and in a slightly awkward situation. In this first book, we get a good bead on Moss; who he is, what he's been doing, and where he's going. He's a likable cowboy who's headed home from Mirage. (I like the fact that he wakes or sobers up after a twelve year stupor that seems like a 'mirage' to him).

As he's heading out, a favor is asked of him and he agrees after bartering for the going wages of the job. He's given another horse but thankfully he keeps his rough but trusty mustang Shakes, who's also a likable companion. On the trail, he keeps waking up by a little surprise the two children leave him and can't figure out what it means. Are they trying to hurt him or help him?

A.R ARRINGTON is definitely on my 'author to watch' list as a great new western writer.

Road to Redemption's going to be a great new western series. In fact, I can't wait to hear the next installment after hearing the preview. It takes place in Deadwood, S. Dakota with Wild Bill Hickok and Calamity Jane.

ALEX ZONN has the perfect voice for Moss. He sounded exactly as one would imagine an ole cowpoke would. He had the twang and the right voice inflections making this an outstanding listen. I look forward to listening to more from him as well. This was a perfect author/reader match.