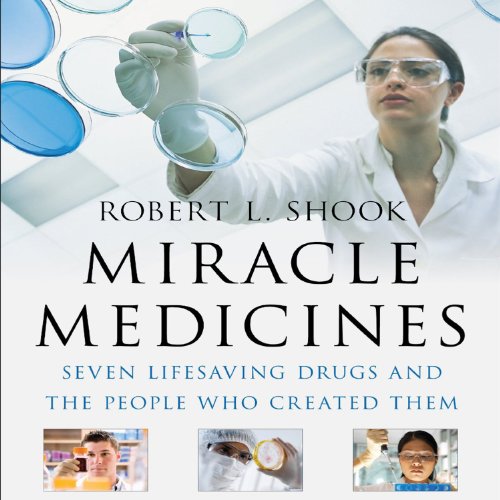 Seven Lifesaving Drugs and the People Who Created Them
By: Robert L. Shook
Narrated by: John McLain
Length: 16 hrs and 7 mins
Categories: Biographies & Memoirs, Professionals & Academics
4 out of 5 stars 3.8 (6 ratings)

By: Robert L. Shook
Narrated by: John McLain
Free with a 30-day trial

It’s the business of saving lives. Miracle Medicines goes behind the scenes of the pharmaceutical industry and into the high-security laboratories to tell the stories of the men and women - chemists, physiologists, medical and clinical researchers, engineers - who have chosen to toil for years in the lab in order to transform scientific theories into new lifesaving medicines. You’ll witness the day-to-day labors, victories and defeats of the dedicated professionals who are waging a war against the diseases that still plague mankind.

From the confines of their laboratories, these pharmaceutical adventurers explore unknown territories in health and science. Miracle Medicines reveals what really happens during the long and uncertain journey that each new drug and its creators must endure from theory, to research, to testing and, finally, FDA approval and delivery to the public. It’s a very human story within the context of fascinating scientific innovation.

Through first hand interviews you’ll also meet the patients who benefit from these manmade miracles and learn how, within their bloodstreams, an ongoing battle is raging.

The drugs profiled are: Advair, GlaxoSmithKline’s revolutionary asthma medication, the first packaged as both a control and emergency drug; Gleevec: The Novartis’ chronic myeloid leukemia treatment born from decades of medical research in a field of study that was once considered hopeless; Humalog: Eli Lilly’s reinvention of insulin to control diabetes has been described as being better than nature; Lipitor: Pfizer’s miracle antidote for high cholesterol that was nearly lost to the pharmaceutical vaults and has since become the world’s top-selling medicine; Norvir: Abbott’s contribution to the fight against HIV that nearly erases all traces of the disease from the bloodstream and prolongs the life of patients; Remicade: Created for the treatment of Crohn’s disease, rheumatoid arthritis and other Immune Mediated Inflammatory Diseases, Johnson & Johnson’s revolutionary biomedicine was developed from technology that once was only found in science fiction; Seroquel: AstraZeneca’s treatment for both schizophrenia and bipolar mania that has given millions of psychiatrics a new lease on life.

This compelling and truth-revealing book will forever change the way you view the medicines in your medicine cabinet, and the people who create them.

What listeners say about Miracle Medicines

Would you try another book from Robert L. Shook and/or John McLain?

No. Had I been smart enough to look at what else he's written, I probably would have passed on this one. I wasn't, so I had no idea he was a corporate shill with no understanding whatever of his subject, and a drug-company sponsored agenda.

Has Miracle Medicines turned you off from other books in this genre?

No. The book doesn't belong in the Science section - it belongs under "corporate hagiography."

The performace was uninspired, but that's hardly surprising given the text. Also, the author badly mispronounced technical terms, which sometimes made discerning intent a bit hard.

No. You couldn't pay me to finish it - I listened to the two first (of a promised seven) profiles.

This book does not belong in Audible's collection - it's clearly a corporate sponsored attempt at cheerleading and image reclamation for drug companies. I would be surprised to learn that the author was paid by PhRMA to write it. And for all that, the writing is barely high school level. Shame on you for taking folks' money to promote this stuff.

Bias to the point of comedy

I read this after finishing bad pharma because I always like to hear the opposing viewpoint but this is so unashamedly preferential it actually made me burst out laughing. It is interesting to learn how many drugs were discovered (particularly insulin) companies created and the profits made Moreover, how before research, the idea drugs success were at the whim of market forces is fascinating but you won’t really hear any argument not made in the west wing episode In This White House. If I was trying very hard I could point out that I have had university lecturers saying research boards are sometime to stringent and slow research but this book is really just bias.

The real interest I have in this book is seeing it as propaganda. I mean this is well thought through making companies anthropomorphic by telling their stories is particularly good.