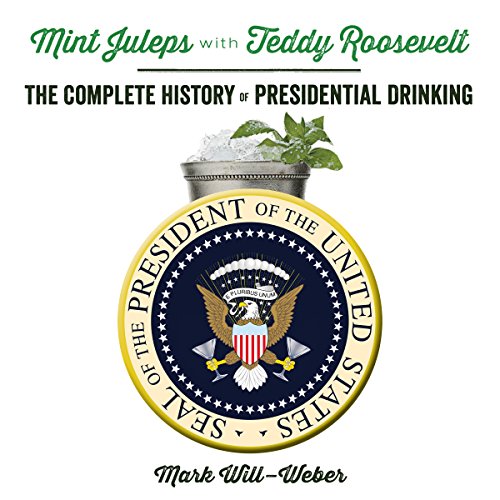 By: Mark Will-Weber
Narrated by: Mike Cheifetz
Try for $0.00

Stroll through our country's memorable moments - from George Washington at Mount Vernon to the days of Prohibition, from impeachment hearings to nuclear weapons negotiations - and discover the role that alcohol played in all of them with Mark Will-Weber's Mint Juleps with Teddy Roosevelt: The Complete History of Presidential Drinking.

As America transformed from fledgling nation to world power, one element remained constant: alcohol. The 18th century saw the Father of His Country distilling whiskey in his backyard. The 19th century witnessed the lavish expenses on wine by the Sage of Monticello, Honest Abe's inclination toward temperance, and the slurred speech of the first president to be impeached. Fast forward to the 20th century and acquaint yourself with Woodrow Wilson's namesake whisky, FDR's affinity for rum swizzles, and Ike's bathtub gin. What concoctions can be found in the White House today? Visit the first lady's beehives to find out!

Which Founding Fathers had distilleries in their backyards

The teetotalers versus the car-totalers

Whose expensive tastes in vintages led to bankruptcy

Which commanders in chief preferred whiskey to whisky

The preferred stemware: snifter or stein?

Which presidents and staff members abstained, imbibed, or overindulged during Prohibition

So grab a cocktail and turn to the words of Mint Juleps with Teddy Roosevelt for a unique and entertaining look into the liquor cabinets and the beer refrigerators of the White House. Cheers!

What listeners say about Mint Juleps with Teddy Roosevelt

Book is separated into chapters for each President, then sub-chapters of stories. At first I thought the audio production was the problem until I read a chapter. The book has a lot of italics and other punctuation used to make asides. The narrator uses his voice in odd was to highlight this style of writing.
Too many of the stories are uninteresting and give the impression they were added to fill out the chapters.
As an experiment, I am interested in reading the book to determine how much the narration affected my opinion.