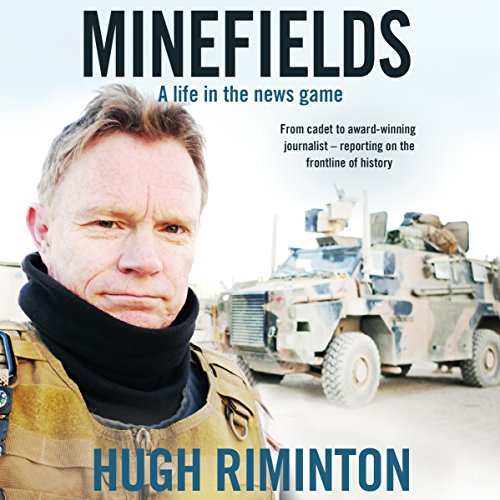 A Life in the News Game
By: Hugh Riminton
Narrated by: Hugh Riminton
Length: 12 hrs and 55 mins
Categories: Biographies & Memoirs, Art & Literature
5 out of 5 stars 5.0 (2 ratings)

Hugh Riminton was a small-town New Zealand teenager with a possible drinking problem and a job cleaning rat cages at an animal lab when a chance meeting with a radio news director changed his life.

The news man took a chance on him, and at 17 Riminton became a cadet reporter.

On the strength of a two-line job ad in a Perth newspaper, he escaped to Australia.

Within three years of getting his start in television, he scored one of the most prestigious and sought after jobs in Australian journalism - the role of London-based correspondent for the Nine Network.

As a foreign correspondent, he travelled the world, reporting from Somalia, covering the IRA bombings, narrowly avoiding being murdered by a mob in Soweto; the Balkans were at war; the tanks were rumbling in the streets of Moscow. Back in South Africa he got a chance to see up close the genius and humanity of the great Nelson Mandela. And then the Rwandan genocide began, and Hugh was despatched to investigate - with former Prime Minister Malcolm Fraser tagging along.

As the French prepare to resume nuclear testing in the Pacific, Hugh flew to Tahiti to be caught in the middle of the protest riots. After a day of being teargassed and watching his hire car getting torched, evening fell with the capital Papeete in flames. His reporting won him a Logie Award.

Over nearly 40 years, he has been shot at, blown up, threatened with deportation and thrown in jail. He has reported from nearly 50 countries, witnessed massacres in Africa, wars and conflicts on four continents, and every kind of natural disaster.

He has also been a frontline witness to pivotal moments in Australian history, from the Port Arthur massacre to the political dramas of Canberra, receiving almost every major journalism award Australia has to offer.

Minefields is Hugh's fascinating story of over 40 years on the front line of the news game.

A brilliant book that delivers insightful details of the major stories and events of his career. The content can be challenging but re-enforces the reason to be thankful we have quality journalists like this witnessing and reporting on so many important events in the world, but spare us from being exposed to the horrors and dangers.

His style is calm, balanced and truly professional. If only we had more people like him.

Such a full interesting life

Throughly enjoyed listening to such an interesting life intertwined with world events that I can relate to in my own life and what I was doing at the time.

I’m not a watcher of commercial tv and live in Western Australian so although aware of Walkley award winning journalist Hugh Riminton, I didn’t know a great deal about him except he read the news in Sydney occasionally. I bought this after hearing Hugh interviewed on Richard Fidlers’s Conversations program.

I became thoroughly engrossed in this book. From page 1 I could not put it down/pull out the AirPods (although it is written in decent chunk size chapters for each journalistic experience so it is ideal for those who prefer a chapter or two before bedtime)

This book gives unprecedented insight into the lives of foreign correspondents who frequently risk their safety, health, sometimes sanity and too often lives, to keep informed we mere mortals in the comfort of our own cosseted bliss. I particularly like Hugh’s explanation of how to administer the ‘champagne cocktail’ reports, striking a balance between conveying the horror and atrocities he’s witnessed without overloading his audience into indifference. From Rwanda to Port Arthur, Afghanistan to the Asian Tsunami Hugh has seen the worst of man and nature but also how often that brings the best of humanity

I don’t often read non fiction but I cant recommend this book highly enough . In fact if this was fiction you’d be tempted to question it’s credibility. It is however, the lived experience of thousands of very courageous foreign and war correspondents without whom we would be ill informed and open only to the truly fake news, propaganda and agenda supporting pap of whoever happens to be in power.

Hugh reads his own words with humility and the clarity of a man with a lifetime’s experience of delivering to camera. It’s no less passionate for that and I have no doubt would have suffered at the voice of a different narrator. He pays homage to his profession and champions those he’s worked alongside and for as well as those who have gone before him.

Cant wait for the mini-series.

Met Hugh briefly after the port Arthur massacre. He impressed me then as a very decent bloke. Reading this book more than confirms that judgement. His descriptions of the events he has reported on and experienced himself is almost like being there. Tears came to my eyes frequently whilst reading this.
Hugh is not just a great author and journo, he is an ethical, caring and compassionate person and this shines through in this book. Read it!

Hugh Riminton’s autobiography is a fascinating retelling of significant events that have occurred in Australia in the world over the last 40 years or so, see from the intimate perspective of a reporter who was there. It’s often quite harrowing as we move from one catastrophe to the next.
I was also interested to discover how someone copes with exposure to such extreme levels of trauma, disaster, death and threats to one’s our safety.
The best thing about this audiobook is being able to listen to it in Riminton’s own familiar voice. It’s as if he’s retelling his adventures to you over a very long lunch.

What an interesting life

Great mix of world events and Hugh’s personal journey.
Informative yet not too heavy.
My only slight criticism is it is read like a news bulletin but that’s what we love about Hugh and I always appreciate a book read by its author.
He seems to be a very humanistic and honourable man. Thanks for your journo service!