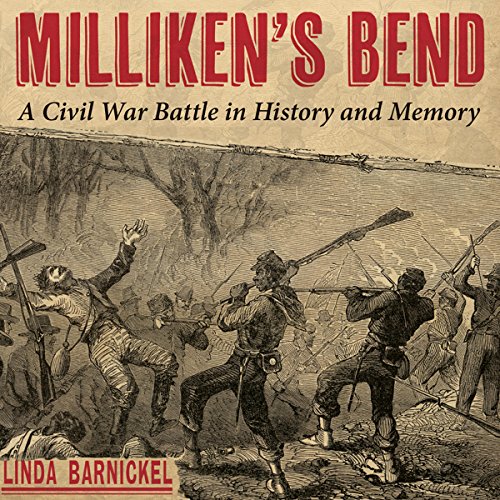 By: Linda Barnickel
Narrated by: Scott Connolly
Try for $0.00

At Milliken's Bend, Louisiana, a Union force composed predominantly of former slaves met their Confederate adversaries in one of the bloodiest small engagements of the war. This important fight received some attention in the North and South but soon drifted into obscurity. The fighting at Milliken's Bend occurred in June 1863, about fifteen miles north of Vicksburg on the west bank of the Mississippi River, where a brigade of Texas Confederates attacked a Federal outpost. Most of the Union defenders had been slaves less than two months before. The new African American recruits fought well, despite their minimal training, and Milliken's Bend helped prove to a skeptical northern public that black men were indeed fit for combat duty. Soon after the battle, accusations swirled that Confederates had executed some prisoners taken from the "Colored Troops." The charges eventually led to a congressional investigation and contributed to the suspension of prisoner exchanges between the North and South. The battle contributed to southerner's increasing fears of slave insurrection and heightened their anxieties about emancipation. In the North, it helped foster a commitment to allow free blacks and former slaves to take part in the war to end slavery. And for African Americans, both free and enslaved, Milliken's Bend symbolized their never-ending struggle for freedom.

What listeners say about Milliken's Bend

This well researched book covers a battle that has not been covered adequately to this point. Utilizing primary resources like journals and newspaper articles and war records, the author tells the story well. The reader also does an excellent job and it was easy to listen to. I recommend this book for anyone desiring to learn more about the Battle of Milliken‘s Bend.