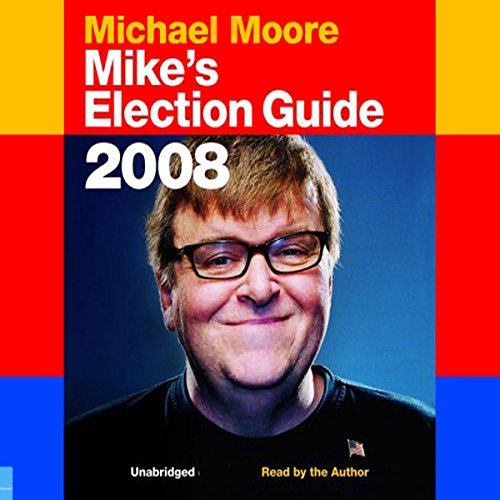 In his first book in five years, Michael Moore brings us the definitive guide to the 2008 election.

After a disastrous war, the failure to catch bin Laden, millions of families who have lost their homes, the Katrina debacle, soaring gas prices feeding record oil company profits, and the largest national debt caused by the biggest spending and borrowing administration in American history, the country has had it with conservatives, right-wingers, and Republicans. A thrilling election season is now upon us. Obama vs. McCain. One candidate has promised a presidency different from any other, one that will take us forward to embrace the hope of the 21st century. The other candidate says he has no idea how to use a computer.

Welcome to Mike's Election Guide 2008 - Michael Moore's effort to make sense of this fall's race for the White House and Congress. In it, Moore answers the nation's most pressing questions: "Why is John McCain so angry?", "Do the Democrats still drink from a sippy cup and sleep with the light on?", "Can I get into the Electoral College with only a 2.0 GPA?", and "How many Democrats does it take to lose the most winnable election in American history?".

It's a great year to be an American and a voter. Don't miss out on all the fun! And don't miss out on Mike's Election Guide 2008 - it's the indispensable book that belongs in every American's ear this season.

should be "Mike's Presidential Guide"

The first half of the "book" is an overly satirical, completely fictional Q&A session. If you can stomach the unbridled sarcasm long enough, the discourse gets better but will not give you any new info on the candidates this election season. The second half highlights changes Mike would like to see the new president make in 2009 and this bit may open the eyes of some of the less enlightened readers to various topics, but to those of us who are a little more worldly and left-leaning, Mike's narrative is not original, enlightening or funny. I'm usually a fan but this download was a waste of 3 CDs and hours of my time.

A quick and fun listen

A good, educational topic with humor as well. Overall, I thought Moore brought up many very interesting points throughout and I'm definitely glad I listened to this!

the usual political antics of mike strikes again...I doubt this book helped Obama get Elected but it is definetely a serious or should I say seriously funny listen. He speaks without biting his tongue and I appluad him for that. How soon we forget about all those weapons of mass destruction huh..kind of makes you wonder will George W. Bush will ever be held accountable for his lies. Mike's attack on Bush and Mccain serves as a first round knock out! but I think america will love this book regardless of what party one belongs to.

I glad Mike decided to narrate this book himself. He comes off as a snide, angry crazy man.