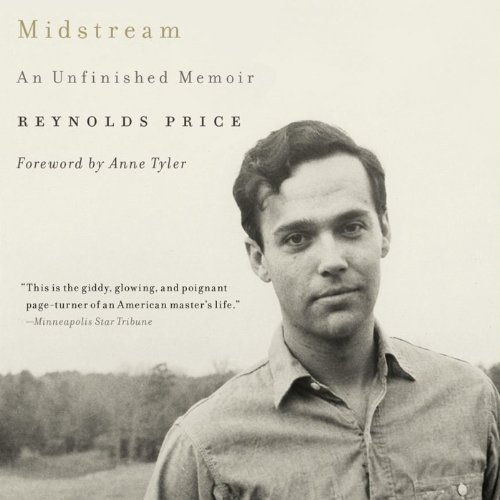 By: Reynolds Price
Narrated by: Mike Lewis
Try for $0.00

The final audiobook from Reynolds Price, "one of the most important voices in modern Southern fiction." - The New York Times - with a foreword by Anne Tyler and an afterword by William Price.

When Reynolds Price died in January 2011, he left behind one final piece of writing - two hundred candid, heartrending, and marvelously written manuscript pages about a critical period in his young adulthood. Picking up where his previous memoir, Ardent Spirits, left off, the work documents a brief time from 1961 to 1965, perhaps the most leisurely of Price's life, but also one of enormous challenge and growth. Price gave it the title Midstream. Approaching thirty, Price writes, is to face the notion that, "This is it. I'm now the person I'm likely to be…from here to the end."

Midstream, which begins when Price is twenty-eight, details the final youthful adventures of a man on the cusp of artistic acclaim. Here, Price chases a love to England, only to meet heartbreak. Determined to pursue other pleasures, he travels to Sweden for a friend's wedding, then journeys to Rome with British poet Stephen Spender and spends an afternoon with Richard Burton and Elizabeth Taylor. Price returns to the United States, where he finds company with a group of artists as he awaits the 1962 publication of his first novel, A Long and Happy Life.

"Few writers have made as dramatic an entrance on the American literary stage," declared The New York Times on the book's success. Price would settle into a tranquil life in North Carolina, buy a house, and resume teaching. Concluding with his mother's death and Price's new endeavors - a second novel and foray into Hollywood screenwriting - Midstream offers a poignant portrait of a man at the threshold of true adulthood, navigating new responsibilities and pleasures alike. It is a fitting bookend for Price's remarkable career, and it reinforces his place in the pantheon of American literature.

What listeners say about Midstream