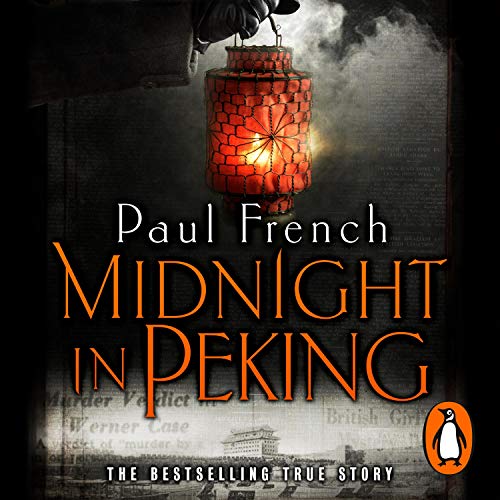 By: Paul French
Narrated by: Crawford Logan
Try for $0.00

Who killed Pamela Werner? On a frozen night in January 1937, in the dying days of colonial Peking, a body was found under the haunted watchtower. It was Pamela Werner, the teenage daughter of the city’s former British consul, Edward Werner. Her heart had been removed. A horrified world followed the hunt for Pamela’s killer, with a Chinese-British detective team pursuing suspects including a blood-soaked rickshaw puller, the Triads, and a lascivious grammar school headmaster. But the case was soon forgotten amid the carnage of the Japanese invasion...by all but Edward Werner. With a network of private investigators and informers, he followed the trail deep into Peking’s notorious Badlands and back to the gilded hotels of the colonial Quarter. Some 75 years later, deep in the Scotland Yard archives, British historian Paul French accidentally came across the lost case file prepared by Edward Werner.

Unveiling an undercover sex cult, heroin addicts, and disappearing brothels, the truth behind the crime can now be told - and is more disturbing than anyone could imagine. Not just the unpause-able story of a savage murder, Midnight in Peking is a sweepingly evocative account of the end of an era.

What listeners say about Midnight in Peking

Would highly recommend, great story and narration. After I I finished I immediately purchased another of this books.

Credit to Paul French for the writing

A great many Imperial Brits have had little to make them proud people. Protection and cover up in the past is just as horrible as it is today.
This is a story that had to be told. What I found so interesting was how much was discovered during the tumultuous '30's as Japan was invading China.
If not already done, this cries out to be made into a good mini series. A movie would have to delete too much detail.
China at the time was a home to Russians having escapied the Revolution, Germans the increasing horror of the Nazis, the fall of Emperors, the rise of greedy capitalists and the hopes of the Red Army and the Long March. All this and the old Triads. In amongst all of this one young woman is murdered. This is her story.

Where does Midnight in Peking rank among all the audiobooks you’ve listened to so far?

really wanted to find out how it ends

Description of old Peking and the Fox tower

SOMETHING DIFFERENT IN CRIME FICTION

I can really recommend this book for anyone who enjoys crime investigations especially ones with a historical perspective. The story recounted here is incredible - all the more so given that it is a true one. The book also includes interesting descriptions of life in Peking at the time especially for the numerous foreigners who lived there for a whole host of different reasons, which was really fascinating.

Without a doubt one of the better audiobooks in my audible library. The subject matter, the setting, the narrative pace and the extraordinarily gifted reader all blend together to form an unforgettable listening experience.

This is one of the few audiobooks that I know I'll return to in a year or so. My experience was enhanced by having read other historical documents from this era of Peking, but the political inner turmoil as documented here through the lens of a suspicious murder, corrupt officials and chinese folklore was just tremendously enjoyable.

Once I started, I was completely hooked. A fascinating tale is dispassionately told, and the reader (I hadn't heard of him before) does it full justice.

The story - as gory perhaps as a Patricia Cornwell - is told without any intimation that the author is revelling in the blood and mutilation. It's the interplay between the two sides of Peking, and the two sides of the victim Pamela, that provide the tension and the compulsion to keep listening. The depth of research that the author undertook, and the skill with which he evokes this vanished world, left me determined to read more about the history of China and its relationship with Britain.

Well worth listening to.

A worthy first foray into the talking book

Would you listen to Midnight in Peking again? Why?
The story was exceptionally detailed and re-reading may gather up more details than on first listen. The book didn't take long for me to get through, as I travel an hour to and from work on public transport.

What other book might you compare Midnight in Peking to, and why?
The book most reminds me of Empire Made Me by Robert Bickers. This was the first book I ordered as an e-book over in China. The two books are cross over the same time period in the same country. The two non-fiction books used detailed historical references, letters and notes to support the narrative.

What about Crawford Logan’s performance did you like?
The narrators performance was exemplary. It couldn't be better and I eagerly await more books read meticulously by him.

Did you have an emotional reaction to this book? Did it make you laugh or cry?
I developed great empathy with Mr Werner, for his loss but also a huge amount of respect for the strength of character he showed throughout his search for the truth and the culture and background he had, that had made him that way. It reminded me of a stronger more resolved version of myself. A character to aspire to. I felt sickened at Mr. Han's creative derailment of the investigation, and Officer Botham's unprofessional and brutish drunken man-handling of the witnesses. I felt revulsion at the self-serving bureaucrats who's cowardice and self-serving actions made no sense in blackballing a man who from every angle out flanked them in class, dignity and resolve.

Any additional comments?
Class from start to finish. It was a pleasing touch that the author had a chance to speak at the end of the work. I hope that this practice is carried over onto other books as I felt it added sincerity, insight and respect for both the writer and the listener - me. Thank you very much!

This is not a book for the feint-hearted. If you don't like your murder mysteries full of all the gory details then probably best to stay away. Having said that, everything was extremely well-written and does not glory in those details, but merely reports them without embellishment. The plot gets a little hard to follow at times, not least because of the plethora of Chinese names and places, however that is part of what makes it different. I enjoyed learning more about the relationships between China and Japan (and other major powers) before the second world war and it whet my appetite for more. The book was well read by Crawford Long and the storyline had enough twists and turns to keep me interested (including an unexpected ending - at least unexpected for me, perhaps others saw it coming). I will look out for other books by this author.

A sensitive study of murder

this book is a rare thing. it is not a voyeuristic study of the criminal but is instead a sensitive, victim centered approach that attempts to tell an awful story with kindness towards the victim. well read by an actor I recommend this book.

I loved listening to this story and learning something about the history of Perking and the life lived there by the ex-pats. It is terrible to think of the miscarriage of justice that happens, and 'who you know', matters just as it does today, sadly. Anyway, a great book and very well read :)

This was on special offer so I thought I'd give it a go and I don't regret it for one minute. When the body of a young girl is found severely mutilated in Peking in 1937 a half-hearted investigation leads to the inquiry being shelved with the compliance of the British authorities. This murder could not have happened at a worse time - Peking is surrounded by Japanese troops threatening to invade at any moment; events in Europe are leading towards an inevitable conflict so the death of one little rich girl was hardly going to be the centre of attention from the various political actors. The author does a stunning job on recounting Chinese history from the period 1911 onwards without it being heavy or too detailed. His picture of the Badlands of Peking is striking and you feel you can see and smell it. Although the enquiry is soon over the quest of one man, the girl's father by adoption, is not going to stop there. He persists with dogged determination to uncover the truth and what a sordid truth it turns out to be. One wonders if the officials involved in wishing to class the affair were not perhaps indirectly involved. The prevailing arrogance of the Empire officials goes a long way to explaining why the Empire crumbled. The whole account is like a documentary and the narrator is brilliant. He reads in a sober and restrained manner which means it is the research which comes to the fore. I would love to read more books about this period of China's history thanks to this book. I cannot reccommend it highly enough.

A window into the past

This is a well researched and very interesting story which shows Britain, it's expats, the Japanese and most of all ever changing China of that period in new and interesting light. The story of the murder and its investigation keeps things flowing and the author has resisted covering the reader or listener in pages and pages of historical facts. At the end you know more without almost having noticed. The narrator also seems to have put effort into the effortless and correct pronunciation of the many non English names making the story flow along and keeping track of the cast easy. Together their efforts combine into an excellent listen.

Paul French really should have decided whether he was writing a factual story based on his research or a fictional used account based on fact. The book falls somewhere between the two. Lacks pace and as a fictionalised account is far too heavy on detail and data about the historical context of prewar Peking, very repetitive and would have benefitted from ruthless editing of repeated detail. Could have formed the foundation for a good novel but singularly fails.

Thoroughly researched and compellingly told. A horrible end for the victim and her father. Fascinating insights into what life was like living in China at the time and the Japanese invasion. I learnt so much

I liked the well researched details of China and the interesting and unfortunate story of the Werners. Well written and told. I recommend this story to anyone interested in China and true crime.