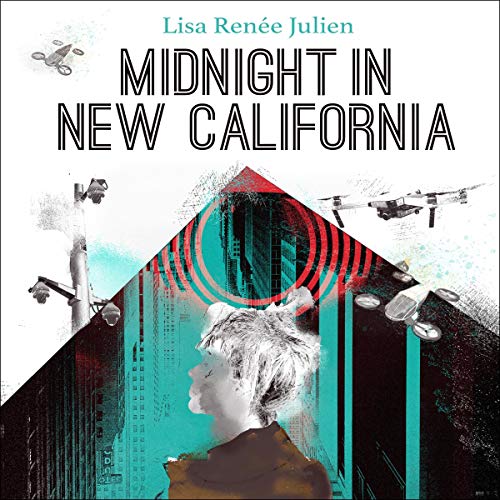 By: Lisa Renée Julien
Narrated by: Jacki Dee
Try for $0.00

Cora Broussard finds herself restless in utopian 2030’s New California until a seemingly chance meeting with Ashley Doral, a sultry free spirit from the Jobber underclass.

Ashley has what Cora wants: fire, agency, and the ability to express unfettered desire. Despite the dizzying bliss of a new romance with Ashley, Cora can’t shake the feeling that she is being watched by New California’s tranquilizer gun-armed government protection officers.

Lured by a strange phone call, Cora embarks on an ominous journey back to the country of her birth. Will her desire for power be stronger than her contentment in the life she created for herself?

Midnight in New California addresses the deep-seated anxiety and thrilling hope of the future, wrapped around toxic romance and cultural identity. Fans of classic sci-fi crossovers like Brave New World and 1984 will love this modern take on the near-future. This bold debut mourns an America not yet lost, questions political extremes, and sounds a dire warning through three fiercely independent, deeply flawed, and ultimately, quintessentially American millennials.

What listeners say about Midnight in New California

Not my cup of tea.

I listened to the first four chapters. But that was enough to say it’s not for me. I just found it boring.

It is set in the near future, and very clearly is basically about Trump and US politics. I’m not American, so that didn’t hook me.

The world building is incredibly slow and very detailed (not my taste, but I know some love it).

Also, I found the interpersonal relationships were disturbing to me personally. Everyone is married, everyone has a girlfriend. Some have a boyfriend. This might be fine in a soap opera, or even as an aside, but I just found that it all seemed to be the point of the book... and that much cheating just doesn’t interest me as a plot.

The narrator didn’t do much to improve it for me, but the style of narration is very consistent with the story.

I received this audiobook for free in exchange for a fair review.

It’s a story with great potential but...

I am a lover of near future speculative fiction and this story has a lot going for it. The BUT has to do solely with the narrator. I’m through chapter three and there’s been some pretty steamy stuff happening. Yet, the narrator seems utterly disinterested. She is clear and concise with every word. You could cut better with her diction. Unfortunately her reading is so robotic and lacking in emotive nuance that I find it impossible to continue listening. I am anxious to enjoy the whole book and will read it on my own so I can create the voices and emotion in my own head.
I hope this review isn’t too harsh. Trying only to be constructive and honest.