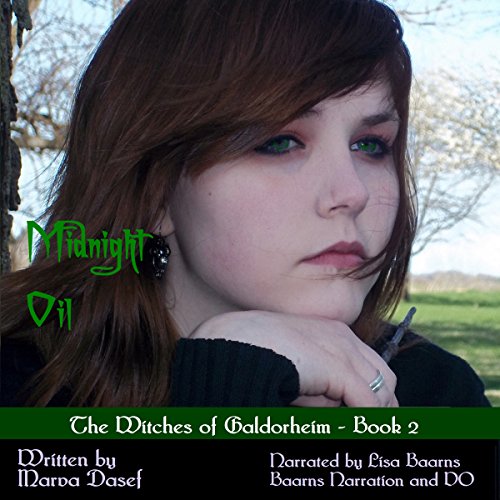 Shipwrecked on a legendary island, how can a witch rescue her boyfriend if she can't even phone home?

Kat is a nervous wreck waiting for her boyfriend's first visit to her Arctic island home. He doesn't show up, so she's sure he's given her the brushoff. When she learns he's disappeared, she sets out on a mission to find him. Things go wrong from the start. Kat is thrown overboard during a violent storm, while her brother and his girlfriend are captured by a mutant island tribe.

The mutants hold the girlfriend hostage, demanding the teens recover the only thing that can make the mutants human again - the magical Midnight Oil. Mustering every bit of her Wiccan magic, Kat rises to the challenge. She invokes her magical skills, learns to fly an ultralight, meets a legendary sea serpent, rescues her boyfriend, and helps a friendly air spirit win the battle against her spiteful sibling. On top of it all, she's able to recover the Midnight Oil and help the hapless mutants in the nick of time.

What listeners say about Midnight Oil

At Sea with Kat and Rune

What made the experience of listening to Midnight Oil the most enjoyable?

What was one of the most memorable moments of Midnight Oil?

There were three: the memorial service for Kat's father; her meeting with Grrk, the disemvowelled (you'll have to listen to the book to figure that one out) castaway, and Rune's introduction to the ultralight.

What does Lisa Baarns bring to the story that you wouldn’t experience if you just read the book?

Ms Baarns has a very pleasing voice, and she uses it expertly to give each character a distinctive personality.

The memorial service for Kat's father early in the book was particularly well done.

I particularly enjoy the artful and mostly humorous blending of ancient tradition and folklore with aspects of the modern world such as the witches riding both broomsticks and ultralights and the trolls and their snowmobiles. The fact that the snowmobiles are sold by the fat elf up north who runs a dealership in the off season makes it that much better. Also, it is refreshing to meet a heroine who uses her head to get herself out of mishaps rather than waiting for someone to do it for her.

Where does Midnight Oil rank among all the audiobooks you’ve listened to so far?

Everything. Lisa does a wonderful job presenting multiple characters consistently and in an entertaining way.

This second book in the Witches of Galdorheim is a fun YA book to listen to. It has adventure, struggles, magic, dangers and romance. There are a variety of plot lines that play out throughout the book and all come together nicely at the end. The narrator does a wonderful job of giving the characters individual voices and fitting the age of the character to the voice. This is an entertaining, story that can be enjoyed by many age groups.

Kat, a half-witch, and her brother, a half-vampire, find intrigue and adventure again, in this second installment to the Witches of Galdorheim series.

Full of mysticism, fun, adventure and danger, this is a very fun and magical story to listen to. Narration is wonderful, and I was completely drawn in to the story, the characters, the world.

Filled with all sorts of crazy characters and crazy adventures, it's one I really enjoyed and look forward to listening to the next one.