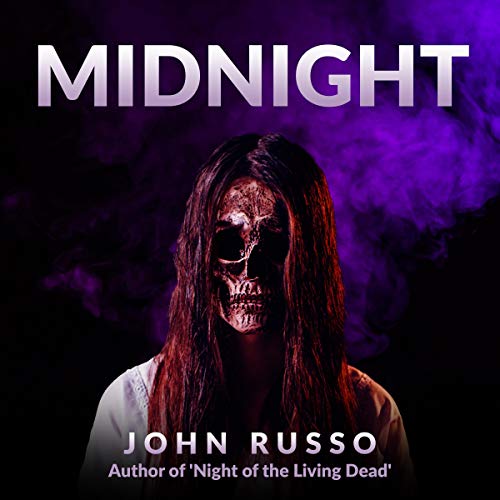 From the author of the horror classic Night of the Living Dead.

Children can get away with murder under the cover of midnight...

Cynthia and her brothers had heard the stories about grandpa, who could summon demons and compel people to die with a curse. Maybe, they also possessed the ancient powers. At first, they caught smallish demons who had assumed the shapes of rabbits and birds and then, larger ones like those who resembled the neighbor kids.

Now, they are growing, and their powers are swelling, nourished by adult desires.

Soon, they will gather others like themselves from the earth's dark corners. Soon, they will begin the blood-drenched ceremonies performed one by one at midnight.

What listeners say about Midnight

Very discreptive and graffic. At least 95% goes against everything Christian but what a story! if you enjoy this genre as I described then you will enjoy this audio.

I enjoyed listening to the narrator. His voice is really nice to listen to.

I received a free copy of this audible at my request. All views expressed in my review are entirely my own.

This book was interesting and not quite what I expected. The narrator did an amazing job. He really kept me interested and gave the story life.

I received a free copy of this audiobook at my request and have voluntarily left this honest review.

As the headline states, I find creepy children pretty darn creepy and this is a story of creepy children. They're the children of devil worshipers and preparing for horrific ceremonies by kidnapping people. It's not super graphic by today's standards but I'm sure hit pretty hard in the 80s, and there's a solid B movie quality to it. However it's let down a little bit in the end by a lack of explanation. However with a pretty solid nihilistic tone it kinda makes sense.

The narrator did a great job of giving voice to this story and keeping it entertaining.

I enjoyed this book overall. It had an unusual ending though. It ended unexpectedly and there was no conclusion to the book.

Firstly, the story, it's all a little bizarre, it is about a rather dysfunctional family, who start off seemingly pretty normal, albeit with 'different' Easter customs, however, after the father disappears everything goes a little weird, I'm not sure if the father has run off because his wife is unbalanced or if she actually bumped him off herself, but she definitely lost the plot after he went, the children were all reasonably well balanced until she cast some spell, killed their aunt and uncle (as a consequence) and then her kids, who cried over dead butterflies, suddenly decide leaving traps in the woods would be a good idea, and after they kill their first poor innocent rabbit their mother tells them that it was their enemy, a demon disguised as a rabbit, so henceforth, the children become more and more sadistic as apprently killing demons is very important to those who worship satan... this is why I am confused. That makes NO sense at all. Years later the children have grown up to become fully fledged satanists and their Easter celebrations include the sacrifice of three girls, the purpose of which seems to be the resurrection of their, by now, deceased mother (why not, it is Easter ... a time of resurrection).

So, the story is fun in it's own twisted way, but is not particularly well told.

The narrator, whilst very pleasant to listen to, makes an amazing number of mispronunciations that did sometimes distract from the story when I was unable to work out what was actually being said, most epic example being Gilles de Rais (it is NOT pronounced gillis de ray is)

In summation, it's not bad, it's actually quite good, but not fantastic.

I was given this free review copy audiobook at my request
and have voluntarily left this review.