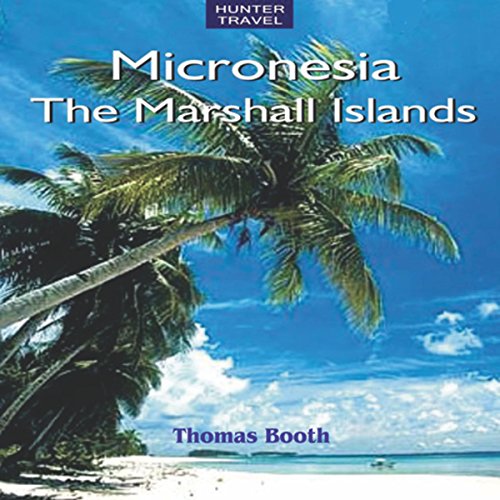 By: Thomas Booth
Narrated by: Randy French
Try for $0.00

The Marshall Islands, named after a British sea captain who explored the group in 1788, are scattered like flung necklaces over about 750,000 square miles of Pacific Ocean. Positioned 2,200 miles southwest of Hawaii, they occupy an area between four and 20 degrees north of the equator.

The islands are aligned in two groups. Those to the west are the Ralik Chain; to the east, they're in the Ratak Chain. Altogether they total 34 islands and 850 sea-washed reefs. All the islands are coral, but five of them without lagoons are referred to as coral islands. The other 29 have associated lagoons and are true atolls.

Twenty-three of these islands are inhabited, with a total population of 43,335. The land adds up to a mere 70-square miles, but the lagoon areas come to an impressive 4,000 square miles. Majuro Atoll with a population of 19,664 is the capital.

Pack a lunch, hire a car, and do the 30-mile drive to Laura - the longest stretch of paved road in Micronesia. Laura is a lovely palm-flanked island with no urban congestion. Visitors get a taste of the outer islands here, and the beach is nearly perfect. If you don't bring a lunch, note that in the environs there are several roadside stands that sell baskets of freshly cooked food, fried chicken and reef fish, some jukuk (rice balls made with coconut,) some breadfruit if it's in season, and a few husked drinking coconuts. Count on paying $15 for a basket - enough food for three or four people.

The dozens of other islands are described in detail, with information on the hotels, the restaurants, how to get there, what to see and do, and even the nightlife.

What listeners say about Micronesia: The Marshall Islands