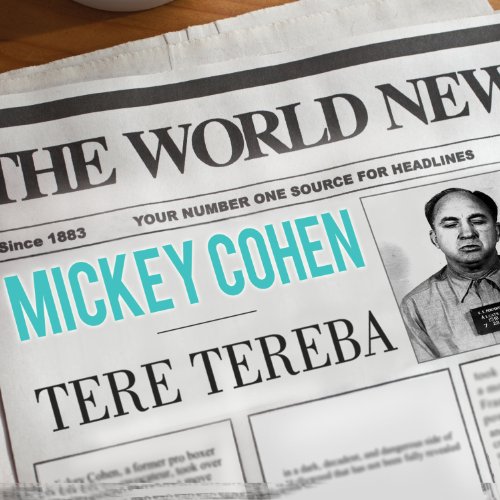 Mickey Cohen: The Life and Times of L.A.'s Notorious Mobster is a seductive, premium-octane blend of true crime and Hollywood lore that spins around a wildly eccentric mob boss.

When Bugsy Siegel was executed, ruthless Mickey Cohen, a former pro boxer and cunning provocateur, took over criminal activity in L.A., a move sanctioned by Meyer Lansky and Frank Costello. Attaining immense power and dominance, from the late 1940s until 1976 the semi-literate Angeleno became an above-the-fold newspaper name, accumulating a remarkable count of more than 1,000 front pages in Los Angeles papers alone, and hundreds of articles in national and international periodicals.

Cohen's story and the history of mid-century L.A. are inextricably intertwined, and author Tere Tereba delivers tales full of high life, high drama, and highly placed politicians, among them RFK and Richard Nixon, as well as revelations about countless icons, including Shirley Temple, Lana Turner, Frank Sinatra, and the Reverend Billy Graham. Meticulously researched, this rich tapestry presents a panoramic look at the Los Angeles underworld and immerses the listener in a dark, decadent, and dangerous side of Hollywood that has not been fully revealed until now.

"Tereba brings the bantamweight crook back to vivid life in this biography.... This is a remarkable biography, in that Tereba takes a long-gone, mostly forgotten criminal and through her lively re-creation of the '20s and '30s, the decades in which Cohen was formed, and the later years when he ruled, makes you care." ( Booklist)

Living at a safe remove from L.A., I am a fan of its history. I have spent many hours on the streets mentioned here. I like the occasional true crime, though plenty of it seems pointless and dunderheaded, as if the bottom of many barrels had already been scraped and served up in all the cheap books out there. However, the better sides of all the above comes together in "Mickey Cohen." The narrator is straight from central casting, with her velvety, street-wise tone. She seems a female counterpart to the 20th century crime story radio and TV announcers, blending perfectly with the tale. This book hits the sweet spot between fine research, local color, solid history, well-chosen details, and a lurid delivery that fits its subject like a zoot suit and fedora in a dark alley. This author artfully and carefully crafted this sharp little gem.

Mickey was not your average gangster. He didn't discriminate; he ran with a very diverse crowd. He wasn't a womanizer, (largely due to germophobia), and he didn't kill at random, not people who weren't in the life and certainly not women and children. He was old fashioned, and that's what I liked best about him. What I liked least - I'll have to get back to you on that.

Would you be willing to try another book from Tere Tereba? Why or why not?

Sure. This book was informative but not overly long.

The narrator did a fair job with this book, but I really think a man should have done the reading. I found it distracting to delve inside the minds of male gangsters when a woman was communicating their thoughts and feelings.

Would you recommend Mickey Cohen to your friends? Why or why not?

No. The reader is wrong for this book. Mispronounced words and names and silly attempts to talk like a gangster