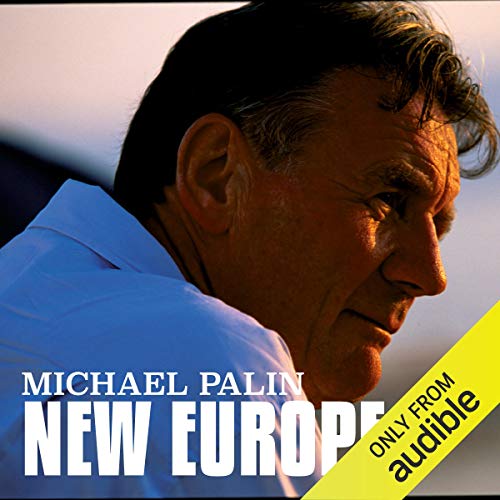 Michael Palin reads his own account of a journey into a new Europe. Michael Palin's New Europe starts with a simple idea: that only a couple of hours from home are a half of Europe that is for him as unknown and unexplored as the plateau of Tibet or the vastness of the Sahara. Cut off for most of his life by Cold Wars and Iron Curtains, Europe's eastern lands are now open for business - and Michael sets off to discover them. Visiting 20 countries, more than in his Himalaya and Sahara journeys combined, he encounters painful memories and exuberant celebrations.

Throwing himself into local life with his usual reckless curiosity, he samples pig fat with a brandy chaser, meets Romanian lumberjacks, drives the 8.58 stopping train from Poznan to Wolsztyn, learns about mine-clearing in Bosnia, treads the catwalk at a Budapest fashion show and watches Turkish gents wrestling in olive oil. It's New Europe, but vintage Palin.

Parts of Europe people do not often visit

I guess I didn't like this book as much as other Palin travel books. Maybe it's because he visited parts of Europe not as known to me or to which it is more difficult to relate. It just took me so much longer to finish it. That won't keep me from reading other books. I love Michael Palin's delivery and his perspective.

History and politics are always subjective and difficult to approach. So I don't want to go in any specifics. But if you are going to present a historical issue, you should at least try to cover both sides of the story without any obvious bias. Michael Palin keeps decrying the territorial losses of one country but seems completely oblivious to the losses and troubles of the neighbouring country. This kind of attitude keeps showing up in multiple instances. He seems to be keen about some places while completely bored and uninterested by others. Also, he completely skipped Belarus without even explaining why, which again makes the whole thing feel superficial. It's still enjoyable and informative but definitely not as good as it could have been.

this was definitely up to his usual standard with fascinating, moving and amusing insights, I found it a little dark though, hardly surprising, given the subject matter. this is very enlightening and well worth the purchase

Not his usual best

Michael says his note book was stolen along the trip and to be honest it shows. I don't feel that Michael really enjoyed this trip the way he did with the others. Seems to lack that sense of adventure his other books did.

I have all of Pailin's travel books and this is no exception. A brilliant listen, improved by the fact that he actually reads it himself. Great insight into a continent and countries that are ever changing, told in Pailin's humorous and sometimes hilarious observant way.
Brilliant

A melancholic memoir of Europe

Michael Palin is a lovely bloke. You can’t imagine him ever running a country as a dictator and I think it is that extreme difference that makes his journey through and history of Eastern Europe so poignant. The hard men and the powerful nutters that destroyed populations and nations are in stark contrast to Palin’s gentle and humorous personality, that I want to cry.

This is a very well observed and interesting tour and a real argument for the joining together of friendly people of not always entirely compatible nations. The EU project in a nutshell.

Listening to this book a few days after the UK leaves the EU gives me a real sense of loss and shame. The rise of nationalism that Palin worries about in 2007 is more prevalent now. Russia has annexed part of Ukraine, Turkey has turned away from its EU opportunity and the UK has allowed the shouty types to spoil a fine relationship with our neighbours. Shame on us, I say.

Best listened to while able to look at the map at the same time. Not great for listening to while driving.

Not as enjoyable as the TV Series

I love the Michael Palin TV Series' but this audiobook I found very monotonous and, I regret to say, boring. Obviously, the visual element of the travelogue is missing and, with the best will in the world, Palin's descriptions cannot replace the ability to observe. The balance of the book isn't quite right making it feel more like a history lesson than a travelogue.

After "Brazil", this is dissapointment

I liked Palin's Brazil very much. It presented a country in very various and lively way, it made me start saving money for my next long vacation to be there - and not visit only Rio and Sao Paolo. So, I bought this one quickly after.

There are few problems with a book. As I lived in "New Europe", I presume is the first one. There is not much new revealed to me, and I don't think only of ex-Yugoslavia, but also of Bolgaria, Romania and Baltic country, which I have not visited yet. Despite being 120+ days around, he did not manage to show countries in interesting ways, as he did for Brazil.

Second problem is repetitiveness, especially from political point of view. Too much time is spent on stories about ex-communist countries, what people think now, how they feel about changes, etc.

And the third one is that some countries receive very little attention. Serbia, for example, is presented only through Belghrade, and even that on very short level.

Not sure I will be continuing with his other travel books.

I'd already bought this particular audiobook,but reading the various negative reviews left by other buyers i felt apprehensive about listening to it,but I have to admit I thoroughly enjoyed it,the last chapters where Michael visited aushwitz were poignant and although short brought back memories for me as a young lad,I had the chance to visit the remains of Bergen Belsen concentration camp,and could understand the description that Micheal gave towards his particular visit.

All in all,another fantastic audiobook 👍

Michael Palin at his very best.

Can't decide which one is better. His writing or his narration. You feel you are there with him. Experiencing people and places as only he can make you feel. loved it start to finish.