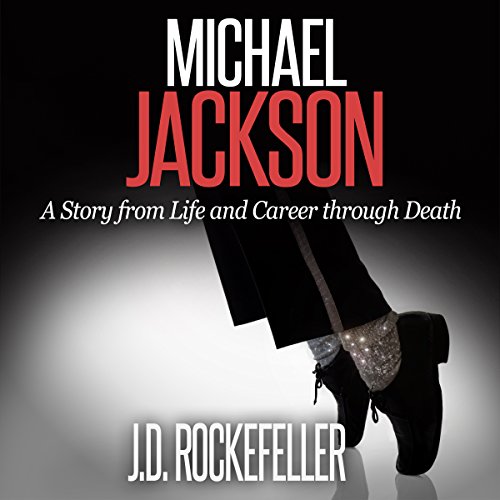 Michael Jackson: A Story from Life and Career Through Death

Michael Jackson, the King of Pop, led an unusual but meaningful life. Through his lifetime, he sold millions of albums and his songs can be heard almost everywhere. Moreover, almost everyone knows at least one of his songs. Although there is no doubt that he is indeed extremely successful, he did not achieve it instantly. In fact, he also experienced struggles and obstacles along the way. Fortunately, he was able to overcome all of it, and his determination to be an outstanding artist never faded.

Here, you may discover things that you never know before, things that had made a great impact in Michael's life. It would surely help you get to know this amazing man more on a personal level. This includes knowing him as a person and not just an artist or a singer. To cut the story short, this book aims to provide you the life of Michael Jackson from his early years until his death.

What listeners say about Michael Jackson: A Story from Life and Career Through Death

The King of Pop lives on!!

I still remember when I was young having to spend the night at my Grandma's house because my mom and aunt were going to Detroit to attend a Michael Jackson concert. His music, dance, style, and talent have been loved and enjoyed by people of all ages, young and old, and still continues even today, years after his death. The influence and impact he has made, not only to those in the music industry, but also to people's lives around the world, is too big for words. He is, and always will be, The King of Pop. He was loved by many and will be greatly missed.

A few days ago, I listened to an audiobook about Marilyn Monroe. Like this one, Michael Jackson: A Story from Life and Career Through Death, it was also written by J.D. Rockefeller and narrated by Mike Norgaard. I feel the two of them together are the new Dynamic Duo! Because of this, I knew I had to find another audiobook collaboration from the two. Well, seeing that I am a MASTER Moon-Walker, just like Michael Jackson, I chose this one right away!

The writing of J.D. Rockefeller is easy to read and to the point. He doesn't waste the reader's time by going off on tangents or dragging on with unnecessary, unrelated details. Because I already know quite a bit about Michael Jackson, the information presented in this audiobook was more of an entertaining refresher. Yes...I could have gone on Google and looked up this same information for free, but who wants to do that after working all day? Plus, couldn't we do the same thing with the majority of books out there that fall into this category? Yes, we could. Sometimes it's nice to have it already researched, organized, and read to you. 👍 It's only about 40 minutes long...perfect for your next drive to/from work or while you are cooking dinner, and a couple dollars cheaper than that fancy coffee you're drinking. 😉

The narration by Mike Norgaard is superior. Some narrators I have listened to in certain books have a voice that tends to distract me by possibly sounding different than they would while holding a conversation (like a man trying to sound more distinguished or a woman trying to sound cute or sexy). This fake narration ends up sounding ridiculous to me, and I end up laughing more than learning about the info being presented. Well, no worries here! Thank goodness that is not the case with Narrator Mike Norgaard! 💯 His voice sounds natural, as it should be. He speaks clearly and has good projection. He speaks objectively and doesn't add-in a persuasive/sarcastic tone, trying to sway the listener's thinking. He presents the facts at an easy-to-understand pace, and I imagine his everyday voice sounds similar to the one he uses while narrating. This is the 100% reason I continue to listen to books narrated by him. Keep doing what you do best, Mike! Great job!

Despite not learning anything new in this audiobook, it gave me the opportunity to sit and remeber all the memorable moments Michael Jackson brought to my life. At mention of his MANY number one hits, it immediately sparked my memory of fun times my brother and I had growing up singing his songs, trying to mimic his unbelieveable dancing style, and wearing a glove similar to his! Those were the days!! With his accomplishments, the book also mentions certain controversies that surrounded his life. I remember where I was when learned of Michael Jackson's death, and in this book we are also brought back to that moment, as well as the to the funeral. Although short, if you are a fan (or want to learn more about the life, career, and death of Michael Jackson), this audiobook is something you will enjoy. The King of Pop will be greatly missed, but his legend will live on forever in our hearts. ❤

Thank you so much for reading my review. I hope it was helpful to you. :-)

No efforts was put to explain important details about Michael Jackson. Any average fan can write better than this. I should have not used one my credits on this.