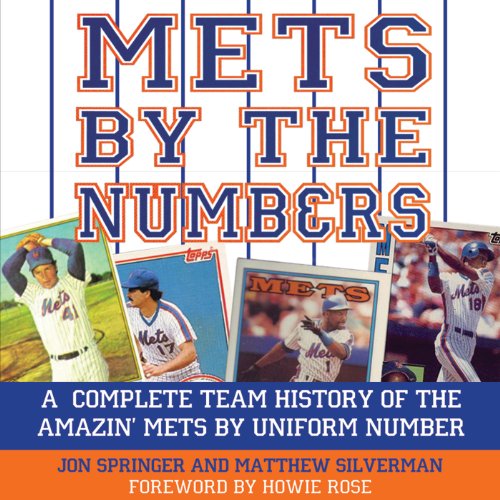 Mets by the Numbers

Mets by the Numbers

This is the first team history of the New York Mets - or any other team - to be told through a lighthearted analysis of uniform numbers.

Ordinary club histories proceed year by year to give the big picture. Mets by the Numbers uses jersey numbers to tell the little stories - the ones the fans love - of the team and its players. This is a catalog of the more than 700 Mets who have played since 1962, but it is far from just a list of No. 18s and 41s.

Mets by the Numbers celebrates the team's greatest players, critiques numbers that have failed to attract talent, and singles out particularly productive numbers, and numbers that had really big nights. With coverage of superstitions, prolific jersey-wearers, the ever-changing Mets uniform, and significant Mets numbers not associated with uniforms, this book is a fascinating alternative history of the Amazin's.

The Narrator had no knowledge of Baseball
or the Mets pronounced several players names wrongs and just could not put an S on RBIs it sounded so bad and made me
cringe listening to him. for example Grote
was pronounced Groat. Todd Ziele was pronounced Zial like dial not Zeal.