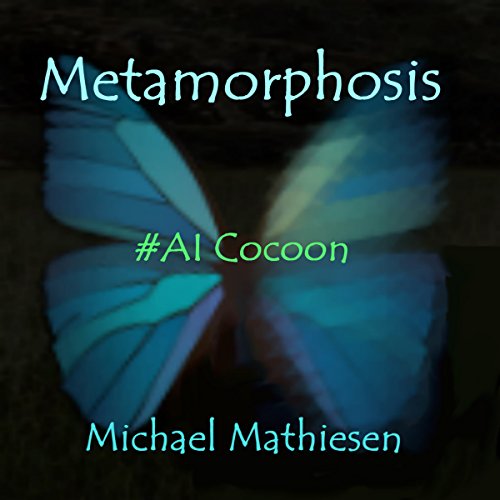 Webster's Dictionary Definition of Metamorphosis: In Biology. a profound change in form from one stage to the next in the life history of an organism, as from the caterpillar to the pupa and from the pupa to the adult butterfly. There also comes a time, in the evolution of a species where Metamorphosis of the entire genome of a species due to sudden and radical environmental change must take place in order for the species to survive in the new environment. There have only been a handful of such times in human evolution. This is such a time.

In just a few short years, the Human Race will create the AI Cocoon. This is a Quantum Computer that is able to be the first Artificial Intelligence on this planet and it will be capable of storing the Human Consciousness. Many people such as Ray Kurzweil, research scientist at Google, are lining up to be the first to achieve immortality by actually leaving their fleshy brain behind and move their entire being into the realm of the AI Cocoon. I coined this term for what everyone else is calling the Artificially Intelligent Quantum Computer because the reality of the situation is that the human animal will go into this device as a caterpillar inhabits its cocoon. But, as we all know from childhood, the lowly worm emerges from the cocoon a few months later and takes the form of a beautiful Butterfly.

When human beings enter our own cocoon, in the next few years, we will bring with us enough knowledge and technology to turn ourselves into anything we want to be, beautiful or horrible, for better or worse, each with earth shaking implications. The choice will be ours to make. We need to start asking the right questions and making the right decisions based on those answers before we we go down the wrong path that may be irreversible. In the billions of years of Evolution on this planet, there has never been such a sudden time of species Divergence as this. Even when humans made the divergence from the apes, the divergence was not as p

This is such an amazing book which one of my friend suggested to me. I am thankful to him definitely. I enjoyed listening to it while lying in my bed. I loved it. You must grab it and enjoy like me.

Michael Mathiesen is mind-blowing. I wish I could have met him. In this collection is a story titled 'In the Penal Colony' - one of the most horrific tales I've ever read. I salute your spirit, Mathiesen!

I really loved this book, I couldn't put it down, it was a really cool that this author expresses the tough subject in a simple way. I loved it.

My Gratitude To The Author

During listening to this book, sometimes you discover certain aspects of yourself that you dared not bring to light. My gratitude to the author for allowing me to listen to such an amazing book.

This is overall a great book but What I love most about these genres is that it allows you to connect with possible inner realities, which are connected with deep emotions and desires, with a part of our subconscious that emerges when stimulated by the figurative narrative.

Happy With This Purchase

It is an informative audible book of more than 5 hours. The author has done remarkable job by putting everything in a easy to understand sequence. I suggest this audible book to all who like listen to the quality audible books. great.

This is one of the best anthologies I’ve read ever. The content is short, vivid, imaginative stories that stimulate the imagination and the emotions. I recommend this.

Beautiful writing. Excellent narration. Wonderfully imaginative. This is a great book indeed which I would like to recommend.

The more I know about genetic research, the less I believe that this storyline (living forever) is a complete fantasy. Of course, it is amiable aliens who bring it to Earth rather than our planet's research scientists. Heck, if jellyfish do not get old, why do we have to?
This book shows the right theory behind it.

I really wanted to like this, having looked at the topic and reviews but couldn’t concentrate. I generally listen on my phone while traveling. The tinniness and poor recording makes it impossible to hear if in busy environment (airport) and without cranking up the volume. I’ve nearly born out my eardrums when the phone rings or I answer a call.
I’ve gotten maybe 30min through and after a variety of attempts am calling it quits.
Maybe the story is good but I’ll never know.