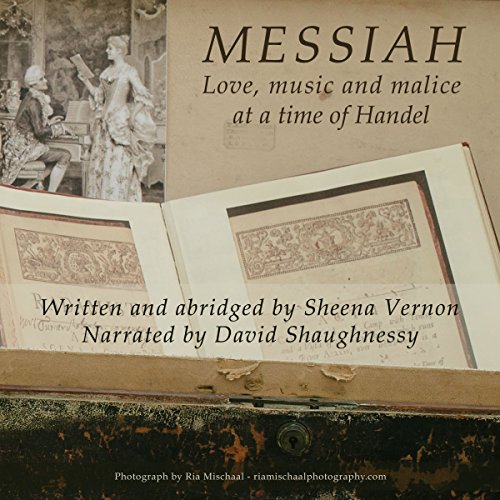 Messiah: Love, Music and Malice at a Time of Handel

Messiah: Love, Music and Malice at a Time of Handel

By: Sheena Vernon
Narrated by: David J Shaughnessy
Free with a 30-day trial

Harry Walsh is a young man on the make. He intends to become a famous singer, little knowing what dramas this will lead him through. He attaches himself to celebrity composer George Frederick Handel, maestro of the Italian opera and a favourite of royalty. But the aristocratic fashion for Handel is cooling. Opposing opera factions, one led by scheming castrato Senesino, knock the great man from his pinnacle. Meanwhile rival impresarios are capturing new audiences with vulgar burlesques and extravagant pleasure gardens. As Harry negotiates his way through these shifts in popular entertainment, his love life proves equally complicated. He develops a passion for Handel's shy, young assistant, Peter, and finds himself tied into a triangle of love that slowly and painfully falls apart. Documenting the launch of the great oratorio, the Messiah, in Dublin, and capturing the self-absorbed world of the singer, this is a light-hearted account of the rise and fall of the Italian opera in Hanoverian London. It is also a well-observed story of confused sexuality and an adolescent yearning for self-esteem and love.

What listeners say about Messiah: Love, Music and Malice at a Time of Handel

If you love Merchant Ivory films, this is for you.

Sheena Vernon’s Messiah: Love, Music and Malice at the Time of Handel invites the reader to join a young singer named Harry Walsh on a journey into the milieu of composer George-Frederic Handel, during the time period of 1732 through 1746. This tale of historical fiction is a well-researched page-turner packed with historical detail and diverse characters of such delightful specificity as one might find in the works of Forster, Dickens or Shakespeare. The story follows Harry Walsh and several other engaging fictional characters through their intricate relationships with persons at every level of society. Appearances are made by notable historic figures including Handel, Senesino, Farinelli, Paolo Rolli, John Beard, Sussana Arne Cibber and her brother Thomas Arne. Through Harry’s eyes, we are introduced to the musical world of this time period in London, and we are additionally afforded a generous view of both the dominant and subculture’s political, economic, artistic, social and sexual theories and practices.

Vernon depicts early 18th century London as a landscape of paradox, at once both familiar and unique. Though of German birth, Handel has become a British citizen, and he writes operas in Italian. The public fetishizes Italian opera but disdains the Italians who sing it and the Protestant German composer who writes it. Previously all the rage, Italian opera is now losing popularity. The style of foppish male clothing is admired among aristocrats but cause for suspicion when exhibited by a commoner. Extremes of wealth and poverty, art and burlesque, pleasure and piety, exist in close proximity. The city’s population is international, but xenophobic and incestuous, philanthropic and merciless. It is a fertile breeding ground for art, commerce, opportunity and disease. The soaring spirit of the Messiah is underscored by harsh social constructs and inequities. The author doesn’t mention it, but homosexuals are frequently sentenced to death by hanging. Harry’s journey, from confusion and narcissistic greed toward the wisdom of experience and the questionable adoption of convention, highlights issues that resonate today; he and others in Handel’s circle wrestle with personal integrity and identity against a prohibitive counterpoint of political, religious, artistic, cultural, sexual, and economic exclusion. Sheena Vernon succeeds in creating tension, mystery, humor, relevance and pathos.

Historical fiction strives to captivate the curiosity of both the history buff and the more “innocent” fiction reader. I love this genre, and I think it’s a difficult one because of the balance the writer has to achieve between being pedantic and making references that elude the reader. I admire the balance Sheena Vernon achieves in this regard. I imagine this may be her first public foray into the genre, and this piece shows her promise. I don’t wish to compare her to others who are masters of the genre, because I expect that the masters have evolved over time. I look forward to Sheena Vernon’s evolution as a writer of historical fiction. She is well equipped for the genre by her research skills, humor, and a striking gift for dialogue. Her choice of the focus for this book indicates a curiosity that is valuable in this genre. In addition to giving readers a sense of what life was like in the time of Handel and for Handel himself, the author essentially presents the answer to a more interesting question, “Why did Handel’s Messiah premiere in Dublin instead of London, where Handel resided?” In my opinion, she clearly honors historical accuracy and detail while taking numerous liberties in the interests of engaging the reader in an intimate narrative. She deftly addresses the ambiguous nature of Handel’s personal life and sexuality by surrounding him with persons who raise questions for us, but the author does not wildly speculate or presume to define the private life of the esteemed composer. She exercises subtlety in a number of other regards as well. In the name of the protagonist, Harry Walsh, Vernon neatly references Handel’s publisher, John Walsh. She even includes an incarnation of mythical Timon with a nod to both classical art and Shakespeare.

I particularly enjoyed the story’s delightfully nuanced secondary characters, a Shakespearean range of personalities, dialects, and rhythms. Their dialogue is blessed with both depth and hilarity. For this reason, I recommend listening to the audio book while reading the story. “Messiah” serves up an abundance of fabulous British slang of the period. The context and tone of the writing successfully convey the general meaning of the unfamiliar words, and I would have enjoyed reading the book by itself. Having said that, however, I am so glad that I didn’t just read the book. The audio book is a rare gem to anyone who appreciates the theatre. It is a luxury to listen to British actor David Shaughnessy narrate and channel the entire cast of characters. It’s much like enjoying a Merchant Ivory film. To those with a theatre background, it might be reminiscent of John Barton’s Playing Shakespeare series, which is to say that David Shaughnessy’s rendering of the range of characters is a gift. Don’t miss it. Without the audio, I’m certain I would have missed out on the rich diversity of characters’ personalities and voices, nuances in the dialogue, as well as the juicy sound and intended meaning of 18th century British slang.

This “Messiah” presents artistic, political, and cultural history in a most approachable form, honors the depth and breadth of the period, and identifies more than a few issues that resonate across time.