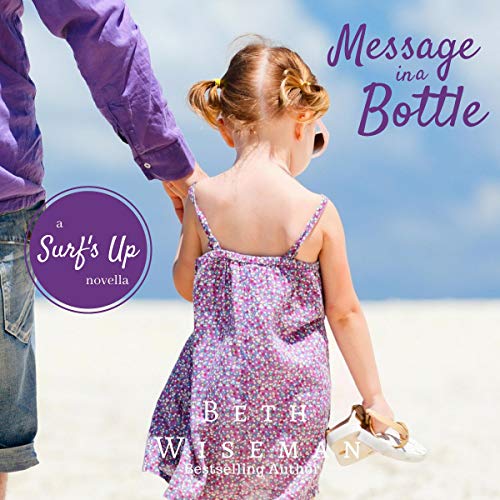 Message in a Bottle

Beth Wiseman has sold two million books. She is the recipient of the coveted Holt Medallion, two-time Carol Award winner, and she has won the Inspirational Readers Choice Award three times. Her books have been on various best-seller lists, including Publishers Weekly.

One man. Two women. A child desperate for medical treatment. How can Kyle choose between the woman he once loved and his current fiancée? Is there a solution that suits all involved, or will someone end up out of the triangle forever?

Morgan Calhoun and her parents are whisked away in the middle of the night, something Morgan always knew was a possibility because of her father's CIA job. But she'd always thought if such a scenario played out that she would have time to say goodbye to those she loved - particularly her boyfriend, Kyle. Adding to her unbearable situation, several weeks after the move, Morgan finds out that she's pregnant.

Kyle Brossmann doesn't even get a break-up letter from Morgan. She's just gone, along with her parents. His heart broken, Kyle continues with his plans. He graduates from high school and attends college, where he meets his fiancée, Lexie. But two men visit Kyle and encourage him to travel to an undisclosed location, where he will meet his five-year-old daughter. Rocked by the news that he has a child, Kyle learns he is the only person who might be able to save his daughter's life.

Will Kyle choose his first love and his daughter? Or will he stay with Lexie and live the life they’ve been planning?

Each Surf’s Up novella takes the listener to a beach locale, weaving romance and adventure into a soul-soothing journey of hope.

Other books in this series: A Tide Worth Turning, The Shell Collector's Daughter, and Christmas by the Sea.

What listeners say about Message in a Bottle

Bring on the Tissues

This story is heartbreaking and encouraging at the same time. It was refreshing to hear the characters go through trials and hear them turn to prayer to help lead their way. Even when the characters do not get the answers they want and anticipate, their faith never waivers.

Ms. Wiseman does a great job developing wholesome characters and Ms. White once again provides excellent voices. With the writing and the narration the reader is able to feel so much sympathy and hope that it's hard for the story to end. I certainly recommend the book for anyone looking for a wholesome love story with the need for tissues.

The characters and voices seemed off

There was something about the characters and voices didn’t work well for me.


—————-
Disclaimer: I received a free code from audiofreebies.com. All opinions are my own.

This was the first book I have listened to by Beth Wiseman and I so loved it. I laughed, cried, sighed, smiled through the whole book. You can picture everything happening as it happens and that is a sign of a well written book. I think I found myself a new favorite author.

Message in a bottle

I enjoyed this short beach romance story.There's a bit more prayer than I like,but the story is good. Cecily White was a fine narrator.I was given this free review copy audiobook at my request and have voluntarily left this review.'

Another sweet story, I received this free and want to leave a review that it’s a well written story to enjoy

Morgan parents are whisked away, with him being in the CIA Then she is leaving without saying goodbye to Kyle, a first love, A twist of a situation he later finds a daughter, who needs medical help. Kyle is faced with decisions , a child and two woman. Short story but well done. Given ARC audio which added to this story narrated by Cecila White, for my voluntary review and my honest opinion.

I Got Involved Quickly

I listened to the audiobook of Message in a Bottle and it was great! The narrator brought this book alive. This is a short story but characters were strong and interesting. I got involved quickly just from the introduction. The story move along pretty rapidly as things started happening right from the start. I certainly enjoyed this book and would love to read/listen to the rest of the short stories in this book.
“I was given this free review copy audiobook at my request and have voluntarily left this review.”

The only problem is that it's not long enough!

I received this audiobook free at my request and am leaving this review voluntarily.

Beth Wiseman's Message in a Bottle is a sweet, emotionally driven romance story, with the only real downfall being that it felt too short. I enjoyed the characters and their interactions, and the plot itself will tug at your emotional heartstrings, as you keep asking yourself what direction will Kyle choose?

I thing Cecily White did a great job with the narration, and after listening to this one, I'm definitely looking forward to checking out the rest of the series to see where this goes!

Don't get me wrong, there was a lot packed in to these 3 hours, but I wanted more. More about Morgan's family (specifically her father), more about Morgan and Kyle's relationship growing up so that I could feel their connection. I think that sum's it up right there. I never felt connected to any of the characters or the storyline. I think this story had a lot of potential.

Cecily White's narration was a nice storyteller approach. Clear. I would have liked to have heard her natural voice for Lexie. Her breathy voice didn't seem to fit. Again, I didn't feel connected to the characters or storyline.

I received a free copy from the author. My review is unbiased and voluntarily offered.

I got this story via audiobook boom and this is my voluntary review. This story had enough plot twists to keep you guessing. Just when you thought you have it figured out. Something turns around. There were some parts when you knew what was going to happen, such as when Lexi found the cufflink. But what followed took a different turn. I loved, loved the ending. I am so glad that all had a happy ending and that Morgan got out of her head enough to do right by all. The narrator really brought the story to life. Overall a good listen.