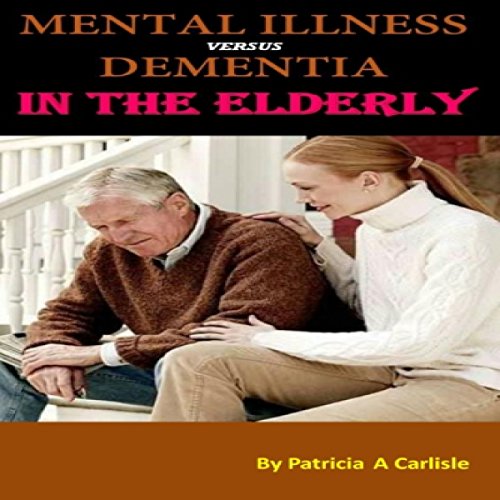 Mental Illness vs. Dementia in the Elderly

By: Patricia A Carlisle
Narrated by: John Fiore
Length: 1 hr and 24 mins
Categories: Self Development, How-To
3 out of 5 stars 3.0 (2 ratings)

Mental Illness vs. Dementia in the Elderly

By: Patricia A Carlisle
Narrated by: John Fiore

This book contains proven steps and strategies on how to determine the difference between mental illness and dementia in the elderly. Dementia is a syndrome characterized by a progressive deterioration of cognitive ability in a previously unimpaired person, and which results in impairment of normal daily functioning. Cognitive function includes memory, intellect, and orientation, thus a person suffering from dementia would have impairment in these various aspects of "cognition". Dementia is chiefly a condition which affects the elderly, and with and increasing elderly population, the number of people suffering from dementia is expected to rise. Dementia, most commonly associated with failing memory, also involves impairment of other aspects of cognition such as reduced ability to learn and reason, loss of patterns of thoughts, feelings, and activities. Symptoms often begin insidiously, and progress over a number of years before becoming noticeable by family members. In the early stages, most elderly may just appear to be a little more forgetful, or may tend to repeat himself/herself during conversations. This usually is passed off as part of aging or being "naggy". Short term memory is usually affected first, so patients with dementia will usually have problems recalling what they had for lunch a few hours ago, but will have no problems recalling childhood events. With the passage of time, the forgetfulness gets more severe. He/she may be confused about the time, day and date. The decline in intellect may interfere with speech and thinking, so he/she may have difficulty understanding speech. There may be personal neglect. Other problems may also set in, such as bowel and urinary incontinence, their behavior becoming odd, getting lost and not being able to find the way home, etc. Dementia is also frequently associated with other psychological problems.