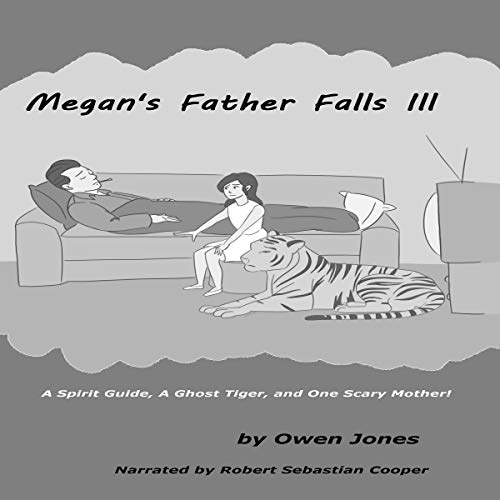 Megan is a 13-year-old teenage girl who realises that she has psychic powers that others do not have. At first, she tried to talk to her mother about them, but with disastrous consequences, so she learned to keep quiet about them.

Megan has three such friends: Wacinhinsha, her spirit guide, who had been Sioux in his last life on Earth; her maternal grandfather, Gramps, and a huge Siberian tiger called Grrr.

Wacinhinsha is extremely knowledgeable in all things spiritual, psychic and paranormal; her grandfather is a novice "dead person", and Grrr can only speak Tiger, as one might imagine, and most of that, of course is unintelligible to humans.

In Megan's Father Falls III, Megan is concerned about her father's health because she has never seen him ill before, so she decides to try using her psychic powers to cure him. In the end, she uses a combination of her gifts and the internet to discover ways to help him recover.

Wacinhinsha gives her a lecture on medicine and its application, especially from the Spiritualist point of view.

I listened to this amazing book with my daughter and Goddaughter who both loved it. I am in awe of Owen Jones how he manages to write books geared toward kids that they love and can be used as a teaching opportunity. I highly recommend this book and series to children and adults as it will open up the lines of communication. I received this book from Audiobooks Unleashed and this is my honest unbiased review. We loved it.