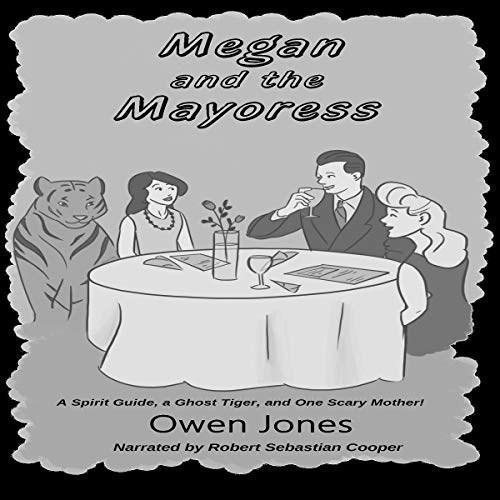 Megan and the Mayoress: A Spirit Guide, a Ghost Tiger, and One Scary Mother!

Megan is a 13-year-old girl who realizes that she has psychic powers that others do not have. At first, she tried to talk to her mother about them, but with disastrous consequences, so she learned to keep quiet about them.

However, some people did offer to help, and an animal showed a special friendship, but they were not "alive" in the normal sense of the word.

They had passed on.

Megan has three such friends: Wacinhinsha, her Spirit Guide, who had been Sioux in his last life on Earth; her maternal grandfather, Gramps; and a huge Siberian tiger called Grrr.

Wacinhinsha is extremely knowledgeable in all things spiritual, psychic, and paranormal; her grandfather is a novice "dead person"; and Grrr can speak only Tiger, as one might imagine, and most of that, of course, is unintelligible to humans.

In this episode, Megan uses her powers to look for a lost cat in answer to an advert. The owner of the cat turns out to be the mayoress, and she is very grateful.

Megan’s parents encourage the friendship, and Megan enjoys the new world of politics that she is introduced to, but her spirit guide, Wacinhinsha, urges caution.

What listeners say about Megan and the Mayoress: A Spirit Guide, a Ghost Tiger, and One Scary Mother!

This is a well written book about Megan learning about politics and true friendship. I listened to this book with my Goddaughter and now she is interested in politics. We both loved the storyline and characters and the message that Mr Jones is trying to teach the youth. I highly recommend this series. I received this book from Audiobooks Unleashed and this is my honest unbiased review.