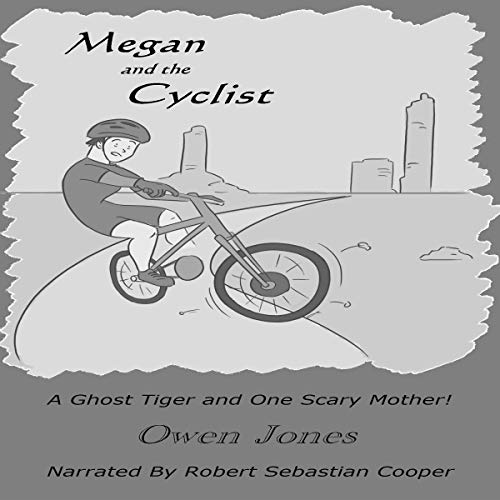 Megan and the Cyclist: A Spirit Guide, a Ghost Tiger, and One Scary Mother!

Megan is a 13-year-old teenage girl who realizes that she has psychic powers that others do not have. At first, she tried to talk to her mother about them, but with disastrous consequences, so she learned to keep quiet about them. However, some people do offer to help, and an animal showed a special friendship, but they were not "alive" in the normal sense of the word. They had passed on.

Megan has three such friends: Wacinhinsha, her spirit guide, who had been Sioux in his last life on Earth; her maternal grandfather, Gramps; and a huge Siberian tiger called Grrr. Wacinhinsha is extremely knowledgeable in all things spiritual, psychic, and paranormal; her grandfather is a novice "dead person"; and Grrr can only speak Tiger, as one might imagine, and most of that, of course, is unintelligible to humans.

In this audiobook, one summer’s day during the school holidays, Megan and Jane decide to go cycling in the countryside. They stop for lunch in a village en route, and Jane gets her first lesson in seeing and touching Grrr, Megan’s friendly ghost Siberian tiger. After resting, they get back underway on the second half of their circular journey. Suddenly, they come across an injured cyclist and get him to hospital.

The grateful boy and his parents want to thank Megan and Jane, and a long friendship ensues, beginning with riding lessons on Will’s family’s farm. It leads to great benefits for the two girls, and Megan’s knowledge expands when she meets her mount, and later when her spirit guide answers her questions.

What listeners say about Megan and the Cyclist: A Spirit Guide, a Ghost Tiger, and One Scary Mother!

I love to listen to these books with my tween Goddaughter because it opens a path of communication especially questions. We both enjoyed this book and she actually understood the message behind the story. I am not thrilled with the narrator because his voice just doesn't seem to fit any of the characters. I still highly recommend this book and series to be listened to with an adult because it can open up an open honest conversation between you and tweens or young teenage girls. I received this book from Audiobooks Unleashed and this is my honest unbiased review.