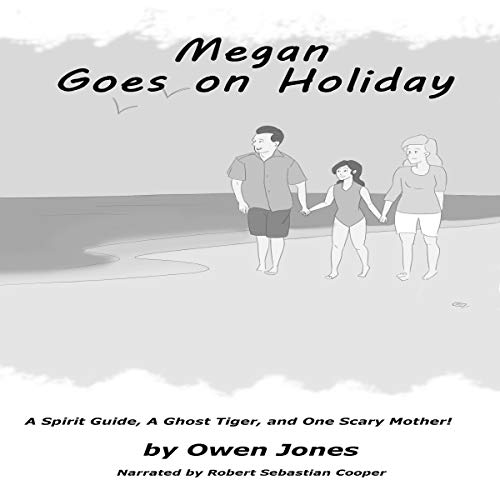 Megan is a 13-year-old teenage girl who realizes that she has psychic powers that others do not have. At first, she tried to talk to her mother about them, but with disastrous consequences, so she learned to keep quiet about them.

Megan has three such friends: Wacinhinsha, her spirit guide, who had been Sioux in his last life on Earth; her maternal grandfather, Gramps; and a huge Siberian tiger called Grrr.

Wacinhinsha is extremely knowledgeable in all things spiritual, psychic, and paranormal; her grandfather is a novice "dead person"; and Grrr can only speak Tiger, as one might imagine, and most of that, of course, is unintelligible to humans.

In Megan Goes on Holiday, the family goes on holiday abroad and Megan becomes besotted with the place. On her return home, she makes a bit of a fool of herself by pretending to be what she is not and showing off. However her mother and a few others bring her back to reality.

Wacinhinsha gives her an explanation for her recent infatuation with her holiday destination.

What listeners say about Megan Goes on Holiday

I listened to this book with my Goddaughter and she just loves the series. The story is well written and educational. The only thing that takes away from this amazing story is the narrator his voice is to gravelly to do a good or even decent female character. I received this book from Audiobooks Unleashed and this is my honest unbiased review.