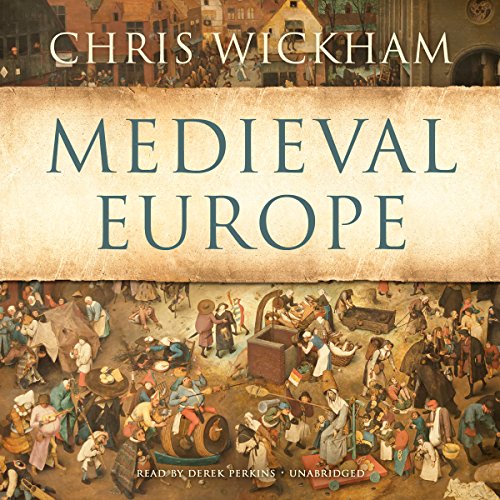 By: Chris Wickham
Narrated by: Derek Perkins
Try for $0.00

The millennium between the breakup of the western Roman Empire and the Reformation was a long and hugely transformative period - one not easily chronicled within a single volume. Yet distinguished historian Chris Wickham has taken up the challenge in this landmark book, and he succeeds in producing the most riveting account of medieval Europe in a generation.

Tracking the entire sweep of the Middle Ages across Europe, Wickham focuses on important changes century by century, including such pivotal crises and moments as the fall of the western Roman Empire, Charlemagne's reforms, the feudal revolution, the challenge of heresy, the destruction of the Byzantine Empire, the rebuilding of late medieval states, and the appalling devastation of the Black Death. He provides illuminating vignettes that underscore how shifting social, economic, and political circumstances affected individual lives and international events. Wickham offers both a new conception of Europe's medieval period and a provocative revision of exactly how and why the Middle Ages matter.

What listeners say about Medieval Europe

Wow! Outstanding Work on the Period

Three charactoristics make this book a GREAT listen. 1) The reading is EXCELLENT! I felt as though I were inside the writer's mind. 2) The organization of the material never lost me. A leap forward or flashback never left me hanging because it was always tied so neatly to moment being described. 3) The balance between presenting the overview and the detail never overwhelmed me nor left me wanting for greater insight. Of course if I want to understand more about the crusades, I need to listen to 10 hours on the crusades, but now I know about the crusades in a way I never before did. --Dane

learned a great deal about something I thought I already understood. narration.was excellent and in.proper english

great narration and book. very dense and great information. I found it hard to follow at times with a lot of dates being thrown out at once, I think this is more a product of the audio book medium than the fault of the author or book.

I very much appreciated this book as something of a history buff. I’m not sure this would be the best first introduction to the topic. I would instead suggest one of the Great Courses, especially the ones by professor Daileader. That said, amazing narrator and very enjoyable.

must be read not listened to.

this is an example of when hearing a book read does not work. i am listening to this book to LEARN something about medieval europe. however when this book is read to you you cannot absorb the material. it goes by so quickly that there is no comprehension being put forward of the concepts. when you read this book you read at your own pace and stop to consider each idea that are contained therein. that is how learning works otherwise one sentence "runs "into another and the listener gets nothing out of it.

I found my mind wondering often and then being totally lost. tough book to absorb through audiobook format. Interesting content though. I'd recommend reading it instead though.

Learned this history in school, now learning it again. Much more interesting than in the school.

Should be titled “the importance of taxation in medieval Europe”. Overarching & grandiose language. Barely touches on any artistic achievements (only literature & briefly architecture). Zero mentions of the massive technological advancements made, other than the 1 obvious: the printing press.

Too Confusing as an Audio Book

It was interesting listening to the beginning of this book where Mr. Wickham ranted and discounted how people preceding him chose to write books about this subject. It was very off putting. I understand wanting to try a different format other than the linear format of history. But, there was no need to be so bitter about how others have chosen to write about the subject. Especially when his book is confusing, disjointed and made me feel like I was in a boring college history lecture.
I am not sure if reading this book as opposed to listening to it would make a difference. He jumps around so much and spouts off names and dates so often I could not keep up. History is about so much more than names and dates yet sadly you can't get past this with him constantly peppering you with them at ever turn. It also became tiresome mention something but then promptly tell you he would talk about it in more detail in another chapter.
Honestly, I could not get past the first couple of chapters. I did not feel like I was gaining any insight into the time period and eventually stopped paying attention. The one bright spot in this book is Derek Perkins. He is a fabulous narrator whose talents were wasted on this book.

Would you try another book from Chris Wickham and/or Derek Perkins?

While the book is well-researched and neatly organized, its significant shortcoming is the overly complex language used for the sake of complexity itself. Sometimes the language makes it really hard to see "the forest behind the trees" and understand the original thought of the author. For example, instead of "corruption" it is "the culture of giving money in the hope of getting favors in return" and there are numerous other examples of such sophistry.In this regard the author is a bit similar to the famous Greek historian Polybius, whose histories were really one of a kind once you get past the elusive language of the author and start seeing the flawless logical analysis of the events. Unfortunately, back in the time not everybody would have enough patience to decipher the meaning hidden behind complex grammatical forms and most of his history works were eventually lost as a result.I think the point of using the language and professional terms is not to make books sound more sophisticated and academic, but rather to skillfully illuminate the ideas presented and put them into the right context. I am not sure that this book always succeeds in doing that.But if you manage to get past through the obscure language and get to the point then this book will not disappoint.

A previous review suggested that this might be hard work but I found it to be an engrossing listen. Wickham combines a great deal of learning on a dense patchwork of medieval societies from Iceland down to Moorish Spain and from Russia out to the Irish clans. Due to the scope and erudition of the thing there were times when I had to go back and listen to something a second time but it was always worth it.

The book manages to create a deeply immersive picture of what life was like in the various parts of Europe from the Roman Empire's reinvention as Byzantium to the establishment of Protestantism as a state religion in many parts of the north. Wickham provides a nice balance of material about what Kings, Popes and nations were doing while drawing on diaries that have come down to us from ordinary people who long after their deaths can give us a glimpse into what it might feel like to live a medieval life. It's an added bonus that the author has a dry sense of humor which becomes increasingly amusing as the book goes on.

I like history and don't mind wrestling with quite dry books if they have something new or interesting to say but in this case I'd describe Medieval Europe as a serious historian's idea of popular history. It's written for the general public, there are great stories and engaging personality portraits but to get the most from it you have to concentrate from time to time.

This is by far the best account of the subject that I have come across and in my opinion should become THE standard text for A level and first-year undergraduate studies for a generation.
The book is clear, its material well organised, and - vital for an audiobook - well sign-posted so that the reader can follow their own chosen trail instead of reading from breginning to the end, which, in the event, was how I read it.
It is a real pleasure to find an author who treats treats this period with the combination of broad brush and attention to individual economic, cultural and political detail while flagging up points where the author is introducing his own take on something whether it be general or particular; and always clearly argued and expressed.
The fact that Audible has offered this most excellent book as a free read is to be congratulated as a generous innovation, the more so because others may not be willing to purchase it: I for one will be very proud to own it: thank-you Audible!

Enjoyed this history of a period I have read a number of books on over the years. It’s quite concise in that it gets broadly the 1000 years from 500 - 1500 in a not significant length. However, it is very complex, especially when dealing with the political arrangements of the period, even has he makes these complex points well and interestingly. I did find the political chapters harder to take in while listening as opposed to reading. The social, religious and conflict chapters were excellent.

PS: the use of the phrase ‘that is to say’ is overused.

This book serves as both an introduction to the history of medieval Europe and a discussion of the current state of play in medieval historiography (and more). It is mindful of the entire world-system ie Byzantium especially (and Islam) but remains focused and functional.

The narrator was also excellent.

I often fear these larger, more in depth histories will make for poor listening experiences. In which tge listener is overcome by poor narration or an over abubdance of facts....

This is certainly botvtye case here, every minute listening was a pleasure. Wickham is always a pleasure to read and Perkins has a fantastic cadence and is in my opinion one of our greatest narrators.

I hardly ever review, but this Audiobook is truly fantastic and I reccomend it to everyone.