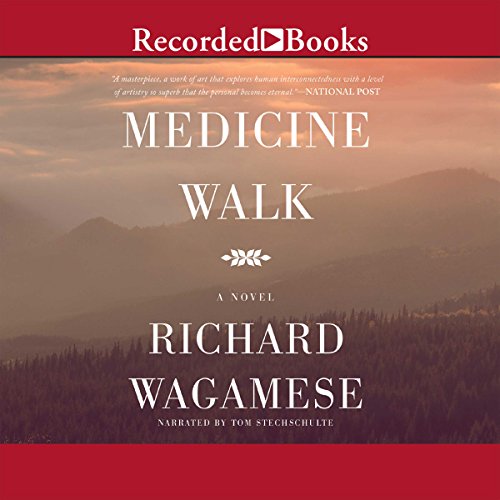 By: Richard Wagamese
Narrated by: Tom Stechschulte
Try for $0.00

By the celebrated author of Canada Reads Finalist Indian Horse, a stunning new novel that has all the timeless qualities of a classic, as it tells the universal story of a father/son struggle in a fresh, utterly memorable way, set in dramatic landscape of the BC Interior. For male and female listeners equally, for readers of Joseph Boyden, Cormac McCarthy, Thomas King, Russell Banks, and general literary.

Franklin Starlight is called to visit his father Eldon. He's 16 years old and has had the most fleeting of relationships with the man. The rare moments they've shared haunt and trouble Frank, but he answers the call, a son's duty to a father. He finds Eldon decimated after years of drinking, dying of liver failure in a small town flophouse. Eldon asks his son to take him into the mountains, so he may be buried in the traditional Ojibway manner.

What ensues is a journey through the rugged and beautiful backcountry, and a journey into the past, as the two men push forward to Eldon's end. From a poverty-stricken childhood, to the Korean War, and later the derelict houses of mill towns, Eldon relates both the desolate moments of his life and a time of redemption and love and in doing so offers Frank a history he has never known, the father he has never had, and a connection to himself he never expected.

A novel about love, friendship, courage, and the idea that the land has within it powers of healing, Medicine Walk reveals the ultimate goodness of its characters and offers a deeply moving and redemptive conclusion. Wagamese's writing soars and his insight and compassion are matched by his gift of communicating these to the listener.

What listeners say about Medicine Walk

In the end we are nothing...

A man's circumstances, geography, vices, and guilt are background for this road trip (horse trip) story about redemption and forgiveness. It is a mid-20th-century Canadian Western that engagingly makes the point that sometimes humans can only rise as far as circumstance allows. The main characters, Franklin and Eldon Starlight are Native Canadians (First Peoples). Eldon, the father has tremendous guilt and psychic trauma resulting from the Korean War. Franklin, the son, is the unintended victim of his father's PTSD.

The story revolves around a request that the father makes to the son for a Warrior's Burial in the Canadian mountains. Franklin must face his own demons to honor his father's last request.

Medicine Walk has many redemptive and thought provoking qualities. I am still thinking about it several days after the listen. I recommend this book to those of us whom enjoy Native American stories and realistic fiction.

Everything about his book is so heart warming. I had to read this book of my English class and this helped me zoom right through it. I love the narration, it was absolutely perfect. I am not the best reader but, this audio book helped me understand more than I needed. Thank you!

I thoroughly enjoyed all aspects of this book and the presentation. it took me to another place and my emotional reactions were deep. it reminded me that we can never guess another's personal journey and we should have patience and kindness rather than judgement.

Just everything about this performance of Medicine Walk was wonderful - a powerful story beautifully told by the narrator. It's an emotional ride, full of deep experience and knowledge, profound loss and our never ending search for our own humanity.

Beautiful writing. A meditation on journey and death and life and regret and guardianship. Read perfectly by the narrator.
I had heard Mr. Wagamese was planning a sequel at the time of his death. While I would have loved to have read that sequel; this novel's arc is very satisfying and feels more than complete.

The most beautiful audible read that I have had the privilege of reading. Tom Stechschulte was perfect and my sincere thanks to Richard Wagamese for writing this book! May he Rest In Peace!

Mr. Wagamese is a wordsmith.

So well written. An amazing account of the struggles of a boy, his father and his dad. Loved it.

This story is truly special and simply profound. Wagamese weaves a powerful story without any frills or verbosity, but full of easy grace and simple power. This story will leave you feeling healed, even if you weren’t aware you needed healing.

Thanks Richard Wagamese , your voice lives on

Beautiful descriptions of nature, the challenges of life and the power of story. A Canadian story. A universal story.

A so, so sad tale beautifully told....

I am an avid reader but have rarely experienced being in such beautiful rhythm with a story. Richard invites the reader to walk, to experience the emotions of Eldon and his son, Frank. A terrible beauty. Wow.