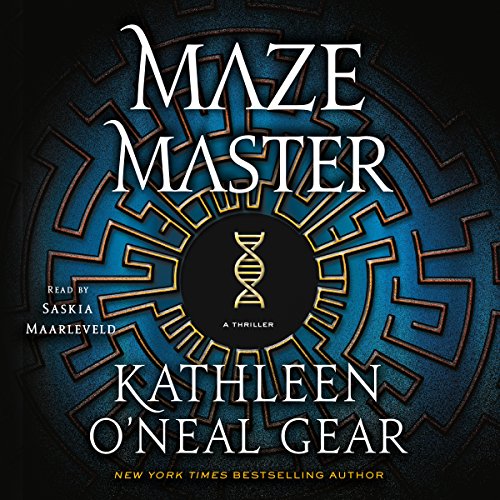 By: Kathleen O'Neal Gear
Narrated by: Saskia Maarleveld
Try for $0.00

LucentB is a retrovirus that’s inevitable, unstoppable, and utterly catastrophic for humanity. The US government believes the only person who can find the cure is the geneticist who tried to warn them about it and then disappeared: James Hakari. They assign the task of finding him to his former student Anna Asher, who in turn recruits paleographer and religious studies scholar Dr. Martin Nadai.

The brilliant but insane geneticist is leaving clues for Anna and Martin to follow, showing he’s truly earned his students’ nickname for him: the Maze Master. The search takes Anna and Martin around the world and into a warzone they never imagined.

Maze Master's LucentB is based off of the real retrovirus HERV-K, which has caused several plagues over the past 75,000 years, almost wiping out Neandertals 50,000 years ago, and maybe 30,000 years ago. Modern geneticists consider HERV-K not to be extinct, but rather to be waiting for some trigger to come alive again.

With its scientific and archaeological authenticity and suspenseful clues, Maze Master will have listeners rushing through its intricate maze to find out the fate of the world in this thrilling adventure. Kathleen Gear, who often co-writes with her husband W. Michael Gear, has authored 42 books which have been New York Times, USA Today and international best sellers.

"Crackles with tension and imagination, captivating with plausibility from beginning to end. The science is both compelling and frightening as the characters match wits in a game with the highest stakes imaginable. The incredible thing is that the most surprising parts are real. This is nail-biting to the extreme." (Steve Berry, New York Times best-selling author)

"Dazzling and ambitious...Maze Master is an epic, breathless countdown to the end of the mankind that can only be saved by locating and understanding ancient clues." (C.J. Box, number one New York Times best-selling author of The Disappeared)

What listeners say about Maze Master

This book is by a favorite author of mine and she didn't disappoint. The math and science in this book was way over my head. I'm glad I had it on audio.
This book was written in 2018 but was so much like 2020 it was scary. I would suggest this book on audio

At times too Scientific

This was an interesting read, at times too scientific, for the non-science loving person. The plot was decent at times too twisty to follow, though! Overall its a good book.

ok. repetitive and disjointed. easier to listen to then read. narration very good. would not recommend.

I was familiar with the "Peoples" series and could not wait for the next in the series. This Genetic/Apocolistic thriller is brilliant. The woman does her research and understands her subject in depth.

Kathleen is an Amazing Mistress!

Think The DaVinci code meets the apocalypse with a slide through the theological to the scientific, specifically DNA and human biology. The essence of the scenario is tried and tested, a mysterious disease is spreading like wildfire and sweeping all of humanity in its path. The execution is fairly different though. Mixing biblical clues with the structural biology of human DNA a literally mad scientist teases the rest of the human race to solve his maze and achieve a cure.

There is a lot of technical detail in here which without fully understanding it I actually enjoyed but it may inhibit the enjoyment of others who like me also enjoy more straightforward apocalypses. There is good action and some decent characters in here to give the book a reasonable pace but the mind-bending pseudo-science permeates the whole thing. I found it to be a pretty agreeable mix and enjoyed the twists and turns of the story and the hunt for the solution. The ending is strung out but given what the characters go through it's fitting they got a full conclusion.

In all an enjoyable apocalyptic thriller with a lot of scientific and biblical puzzle solving thrown in.