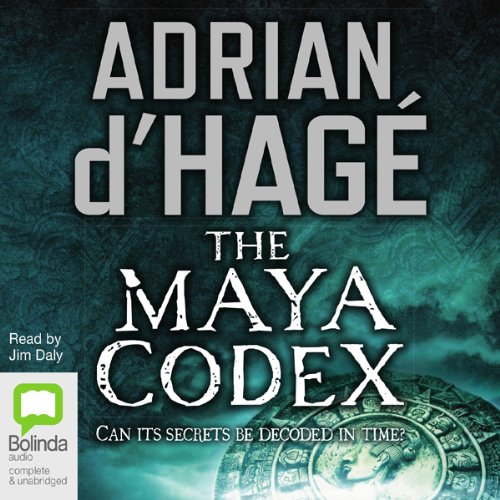 The Maya Codex is a dynamic thriller about the search for a mysterious object from an ancient culture, and a riveting doomsday conspiracy.

Deep in the Guatemalan jungle lies the Maya Codex, an ancient document containing a terrible warning for civilisation. Archaeologist Dr. Aleta Weizman is desperately searching for the codex, but powerful forces in Washington and Rome will do anything to stop her. When CIA agent Curtis O'Connor joins Aleta in her dangerous quest, he also becomes a target.

Both Weizman and O'Connor know that the earth will align with a massive black hole at the centre of the galaxy on the winter solstice, December 2012 - just as the Mayans predicted. Might a geographic pole shift be on the way? But if discovering the codex can avert this global catastrophe, why are some within the Vatican and the CIA determined it should never be found? The race is on for Weizman and O'Connor, and the very future of our planet is at stake.

From the corridors of power in Nazi Germany to modern-day Washington, from the secret archives of the Vatican to the Temple of the Lost World pyramid in the jungles of Central America, The Maya Codex takes us on a heart-stopping journey to find the codex before it's too late.

The end is neigh!

OK the 2012 "End of Times" stories are coming fast and furious now! That all said, this is one that is worth a credit. A fascinating mixture of Mayan history, Nazi Germany's odd ( and true but creepily messed up ) efforts to find their root, and modern military whack jobs, make this a sprawling, but compelling story. It touches alot of history and conspiracy theories ( maybe a few too many for one book, but that is a quibble ) and brings it all together at the end in a nice clean package.
Narration is compelling as well. Lots of accents and characters to revel in, both good and nasty.
I honestly thought that this was one of the better audio books I have hear in some time.

Good writing needs good research and this has it

d'Hage is certainly an accomplished writer and well worth the listen. The trouble is, his subject matter had a grain of 'possibility' before we passed a certain period of time. Now that time has passed and the predictive elements no longer apply and all becomes a bit whimsical. But the charters are rich and there is a level of plausibility that sits like a thin layer of cream on the milk jug. Make sure you listen to the three books in order and they will hold you like Clancy does (did).

Adrain is a master of the art. His personal background as a decorated soldier probably lends to the insights he has shared with his readers. I would call this a modern version of James Bond with of course the necessary ingredient of romance. chilling accurate in his overview of much of the intrigue that goes on behind the scenes

I would & will listen again and have recommend this story to family. Would definitely say my favourite thus far of Adrian D'Hage's would have to be Beijing Conspiracy & I do hope that we are treated to another title of this calibre. My only hesitation in giving this top marks is the hang up with the Church and the bishop abuse of kids. It made sense in Omega scroll but I now fear its detracting from the story and I have found it hard to pick up the next half of this series, Inca Prophecy, given this dark cloud that seems to hang over all titles.

Narrator is so annoying

Cant bring myself to listen to this anymore, after just one hour iv had to switch off because the narrator is just too annoying with his put on German accent, cant even understand what he's trying to say! This is one book id recommend you buy to read not to listen to, totally has spoilt it for me and i'm annoyed iv used up a credit!!!