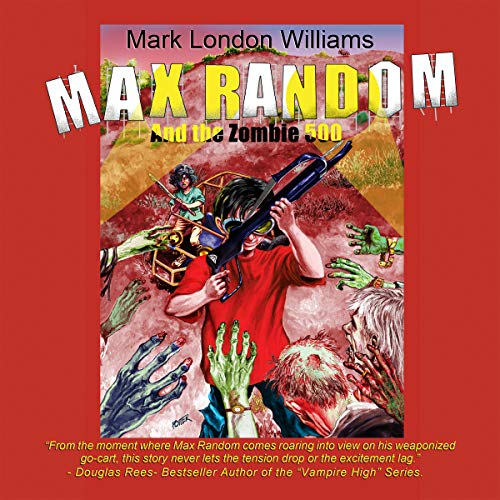 Max Random and the Zombie 500

By: Mark London Williams
Narrated by: Luna Cross
Try for $0.00

“When I first saw Max Random, he was driving his go-kart right at me. He was also wearing goggles, so it was hard to tell if he was dead or alive. I was pretty sure, though, that zombies didn't know how to drive.

And so, weeks after watching her principal try to chew up her school teacher, and minutes after she'd just lost her family, 12-year-old Aurora Bonsall begins her odyssey of escape with Max Random in his hand-built go-kart across a ruined map of abandoned studio back lots, wrecked shopping malls, encounters with the not-quite dead in hospitals and the not-quite tame when they meet a feral cat. All while realizing that surviving humans can be far more dangerous than the Nano-Z's taking over the world.

Max, meanwhile, keeps driving them toward a rendezvous where he says they will be safe. But as Aurora discovers he has secrets of his own, she wonders if there can ever be any escape at all.

What listeners say about Max Random and the Zombie 500

Better than the cover art

I almost passed up this book because of the cover, but then I would have missed out on a delightfully dark zombie tale. From the cover, I thought this book might be silly, even slapstick. Not so! Aurora and Max, two 12 year olds, are stuck in a horrible situation. Set in the near future, the world is coming to an end because of the Nano-Zs – zombies created by nanites.

Aurora has recently lost her parents and hasn’t been able to talk about it. he literally crashes into this story and Max speeds in on his enviro-friendly go-kart to rescue her. She becomes the story teller for this dark tale. While she’s an interesting character, it was Max that truly captivated me. His interface isn’t the usual. He answers questions straight forwardly, sometimes states the inappropriate truth, and tends to go off on tangents. Perhaps it’s autism, perhaps it’s something more.

The story has several interesting minor characters. Dr. Lulu and Tilda were my two favorites. Dr. Lulu has been hiding out at a hospital and perhaps she has figured out something about these nanites. I loved all the little science-y bits. However, the story does have one flaw and that has to do with Dr. Lulu. At one point, Dr. Lulu uses a needle and both kids think it’s for one reason. Later, the story completely changes that up and it doesn’t make sense. That’s not how that works. I felt that the author decided to change directions a little by the end of the story but didn’t take the time to go back and clean up that previous scene.

Anyhoo, then there’s Tilda and her husband Roger. I loved this part of the book because it shows that humans can be as dangerous or more so than the zombies. Along the way, Aurora and Max have adopted a cat. I felt that the cat would have fared better off leash but the kids manage to keep it alive throughout the book. Roger doesn’t like the cat but he’s not long for the story.

The Fungos were a great touch, being a dangerous gang that’s in love with chaos. Aurora and Max have to go toe to toe with this new enemy and things look pretty bleak there for a moment. The story ends with our heroes still marching forward, looking for something they may never find. I really look forward to the next book in the series. 4.5/5 stars.

The Narration: Luna Cross did a great job as Aurora. I love her voice for this brave 12 year old. She also had a great voice for Max, whose voice is described in the story as often lacking emotion, being so straight forward and almost robotic. Cross also had distinct voices for all the side characters and her male voices were masculine. The pacing was good and the emotional scenes were done very well. There were no technical issues with this recording. 5/5 stars.

I received this audiobook as part of my participation in a blog tour with Audiobookworm Promotions. The gifting of this audiobook did not affect my opinion of it.

Action-packed, adrenaline-filled thrill of a story

Audio book review. Max Random and the Zombie 500 is an absolute blast! Aimed at the middle grade audience, it is refreshing for all readers who enjoy the zombie stories but prefer to let their imaginations do most of the work for sketching out the gore factor. That’s not to say the book is watered-down; author Mark London Williams gives plenty of details for readers to immerse themselves in all-things-zombie and his world building is richly written and fabulously done.

“You never think there’s gonna be a last day of tasting ice cream.”

Set in the near future, Max Random and the Zombie 500 paints a realistic picture of how science could go wrong and the devastating, widespread effects when it does. It’s interesting that readers aren’t given a clear villain to blame for the outbreak; rather, there are two explanations circulating among the survivors. Both are plausible, and both are delivered with not-so-subtle social messages, but ultimately, neither root cause matters to those who survive it. These characters aren’t looking to blame – just to live.

“Max talked funny -- like a substitute teacher who overdresses to show how serious they are.”

The characters are excellent, and Williams breathes each of them into full-color life. From the eccentric to the egotistical to the downright evil, there are plenty of people to really…wait for it…sink your teeth into. You’ll eat these people up! (see what I did there?) Main character Max is particularly well done. He carries a bit of emotional baggage and is complex and confusing to others. Readers get a tween’s perspective via main character Aurora, who narrates. She notes Max’s quirks, which adults will recognize as signs of Asberger’s or a high functioning autism of some sort. Despite not having a label for it, at just twelve years old, Aurora is more perceptive, and considerate of Max’s needs than most adults, and she remains a compassionate example of how to treat all living, mostly dead, and dead creatures.

Speaking of those mostly dead creatures: the story hints that maybe these zombies aren’t the mindless, unfeeling, undead that readers are typically shown. And maybe – just maybe – once a zombie doesn’t mean ALWAYS a zombie – a different approach! While the writing is fresh and vibrant, a few misplaced modifiers might catch the listener’s ear, and there is an unnecessary and startling inclusion of a swear word that might bother young readers (or their parents). Additionally, there are times readers are beaten over the head with the obvious, where I wish the author would instead trust his readers to get the point.

Max and the Zombie 500 is an action-packed, adrenaline-filled thrill, right up to the abrupt ending. Don’t worry, though. The conclusion feels more like a chance to catch your breath than an ending, and it clearly indicates there are more adventures to come in this mixed-up, dangerous future world. I will anxiously await the chance to live vicariously through another Max Random story.

ABOUT THE AUDIO NARRATION. Luna Cross does an admirable job with all the characters: young and older, male and female, living and undead, and cats, too! She nails Max’s voice, which underscores his awkward way of interacting with others. Honorable mention for Tilda, too, who couldn’t be more different from Max. To be able to master such a wide range of characters is impressive. It’s a rare thing for me to be able to enjoy an audio book at its regular, intended speed, but Cross’s delivery is just right there. Sometimes the punch of a sentence was lost because of her uneven cadence and where she pauses in her sentences, and there are times when a sudden burst of emotion feels misplaced. However, overall, she is a great choice as the voice of Aurora, and any bumps or inconsistencies are only minor distractions from an enjoyable audio book.

Thank you to Audiobookworm Promotions and the author for providing me an audio download in exchange for my honest opinion – the only kind I give.