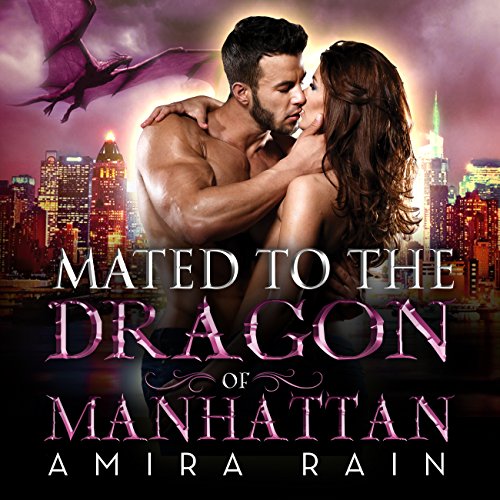 Mated to the Dragon of Manhattan

By: Amira Rain
Narrated by: Zandria Drake
Try for $0.00

Curvy bank teller Brette Morgan has lived in New York City most of her life and she thinks she has seen it all. That is until one day she stumbles upon something she shouldn't have and she finds herself kidnapped and handed over to Lord Truman Stone, a devilishly handsome dragon shifter. He claims there is a whole different side to New York City that she does not know about and that it is he who truly rules Manhattan. However, now that she has discovered he exists he suggests has no choice but to kill her. That is, unless she can prove she is worthy of being his mate.

What listeners say about Mated to the Dragon of Manhattan

Ridiculously comical - maybe not on purpose

Soooo.... this is a joke, right? Is this satire? Farce? Is the author actually making fun of romance novels? Something tells me this is a romance novel version of The Room.

I'm going to type spoilers because you don't want this book anyway.

Leading lady is a banker who says the combination to the bank vault and poof! She's in an alternative version of New York. Where there are dragons. She gets arrested, and in her fumbling attempt to lie, makes up a large, detective boyfriend names Rolando Feathers. At this point I knew something was off.

She gets thrown into the "dungeon," which is what they jokingly call a gigantic sweet in this dragon hotel/business building. After a day or two of not talking, the dragon hero guy confesses he's in love with her.

Then he spanks her for being naughty and she begs him to do dirty things to her again the wall. Now they are in love. IN LOVE. At this point I thought it was going to be a farce. Like one of those, "oops I slipped and landed on your manhood" kind of farces.

The writer has no other word for a guys bits but "rod" and the lady's business is always referred to as "velvety folds" or something like that.

About half way through I realized I was dealing with something that wasn't intentionally funny. Just as he was about to send her back through the alternative wall-thing to save her from the bad guys who were about to come through the alternative wall-thing, and he would maybe never see her again just to save her live (because he loves her just so much) I had to call it quits. So I have no idea how this ends nor do I want to know.

Bad. Bad bad. 1 star bad. The narrator was actually decent tho - poor woman had to read this drivel. I gave her 3 stars.

Storyline was interesting and had promise but it never delivered. The narrator was actually good but couldn't save this totally insipid and ridiculous story. Don't waste your credit.

I forced myself to finish this book. All the back story that the main character did was annoying. It made her sound like an idiot. That's why is not good to know everyone's thoughts. The narrator was good with the voices of the characters

The Story had a great many good points and with a better writer this could have been a fantastic book, but the writing was so bad, just so bad. It was like a teenager with ADD recently exposed to porn, stole the idea of great si-fi/fantany writer, decided to write a book and focus only on the intimate interactions between the two main characters, without developing them as characters in any natural way. Multiple characters in this book have monologues that are supposed to instantly make things sensible and okay for the reader to get invested. This literally could have been two full length books if character development had been more than an after thought to the writer. Instead it seemed like this was some teen drama with adults playing the roles so that the nudity is acceptable.

My first audio book is one I have previously read

Would you consider the audio edition of Mated to the Dragon of Manhattan to be better than the print version?

I read Mated to the Dragon a while back and really liked. When I got a great deal for an Audio. What a great way to "read" when your eyes are tired, or you'd like to play a mindless game on the computer. I listened while waiting in the car.

The narrator did a good job between characters, she was easy to understand and I enjoyed the story all over again in a new way. I liked it so much I purchased another audio of one of my fav books.

Suddenly in a strange place and Bret is in handcuffs, and being escorted down a majestic hall by two gorgeous--guards? Facing an even better looking hot guy on a thrown? She is told they think she is a spy and she is going to the dungeon.

The beginning of a new life a new world and new dangers.

I'm sold -- on the story and on this new format.

What was one of the most memorable moments of Mated to the Dragon of Manhattan?

I loved when Bret lost her fear and turned brave attacking the enemy.

Which character – as performed by Zandria Drake – was your favorite?

Truman. Although it was hard to pick. All of them were distinct.

I found the writing to be Juvenile & unrealistic. The spanking scene was odd. The plot was bad & written poorly. Even the sex scenes were bad. If it were written by a teen I could understand it...but I don't.

I haven't finished it yet & am not sure I can persevere to the end but I have suffered through over half the book. It's as if I want to see how bad it can be. I may finish it on a bored day.

I was curious & checked out the author who it seems has written many books. How can that be? Oh well, to each their own.

Eh, not as exciting as I expected

I wanted to love this book, however, it just did not turn out that way. Brette goes back and forth between being sassy and bold, or wimpy and whiny. Truman was interesting and I mostly liked him. The pairing is not exactly a good time.

This is a great concept, except it is not very well executed. The writing is stilted and oddly formal at times. I would venture to guess that the author did not grow up with English as a first language. It has that feel in the dialogue and narrative. It all added to the strange feeling of the read.

This is all from Brette’s POV, which wasn't the greatest because I struggled to like her. Her inconsistencies in character were too much at times. The “cream puff” stuff only annoyed me. Add on her anxiety disorder that came and went.

The side plots were plentiful. Not one but two separate dramas to deal with. They seemed to drag and did not have enough build or draw in the resolutions. Very disappointing.

It is a smexy read. Loads of hawt and heavy steam. There are a few phrases could have done without, especially as they are repeated often! Her “feminine folds”, his “more than average” size and pretty much any descriptive terms were used incessantly. It takes you out of the scene which should have been uber hot.

I listened to the audiobook narrated by Zandria Drake, who was delightful. This was one of the reasons I finished the book. Definitely the case of a narrator carrying the read. She has a great tone and energy that creates movement in the story. I would love to hear her on something else because she was wonderful.

Overall, this was a disappointing read, I am willing to give this author another shot. I have hope that she will grow and deliver a better story given time.

Disclosure – I received this audiobook in exchange for an honest review. All thoughts opinions and ratings are my own. I was under no obligation to post a review or give positive feedback.

*** I hope this review was useful to you and helped your decision to read or not read this book. I love reading and sharing my opinions with other readers. I listen at double speed; all my impressions of the narration are from that setting. Thanks for taking the time to read my review! You can see more audiobook reviews on my blog Eargasms Audiobook Reviews ***

Story was a bad rip-off of another, much better written, book (Dragon Bound). Heroine was dull. The whole cream puff thing drove me crazy. The hero was not very heroic. Just don't waste your time or money.

Like the unique view of shifters in this story. The narration was very good. Look forward to more books from this author