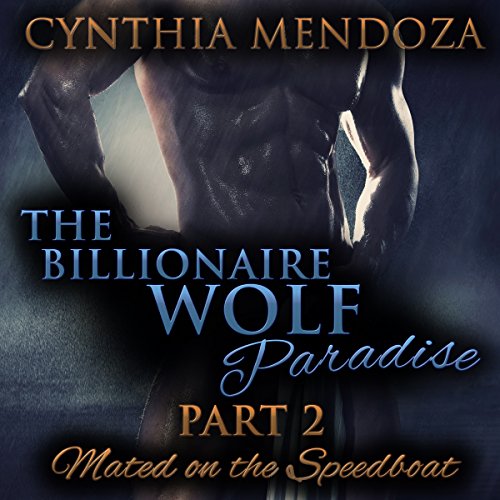 Mated on the Speedboat

Mated on the Speedboat

An Alpha Billionaire with a Werewolf Secret

Warning: This audiobook has several moments that are sizzlin' hot, so it's highly recommended that you dress in appropriate clothing and crack a window before listening!

This book is part two of the the Billionaire Wolf Paradise series, so make sure you start with part one so you don't miss any of the excitement.

Lee's hands gripped her hips, and she heard a low growl starting in his throat. That growl was becoming familiar, and she knew the wolf inside him wanted to get loose. She shook her head at him and flicked one more lick across his neck. He made a gorgeous wolf, but it was not his fur she was interested in right at that moment.

She gasped as Lee increased the pressure on her hips and pulled her down hard on his lap, tilting his pelvis up to meet hers. She felt his hardness nudging into her hot, wet core and wriggled her hips against it, luxuriating in the friction the movement caused.

"For how long?" he asked through teeth gritted with desire and concentration.

Jane rocked her hips against him again and kissed him, sinking her teeth lightly into his bottom lip.

"Keep the wolf inside you long enough that I can have you inside me."

Lee groaned and tilted his mouth to capture hers again, kissing her deeply as Jane reached down to release the button of his pants and ease the zipper down. She felt him lift his hips so that she could slide his pants down over his thighs. He shook his legs until the pants fell to his ankles then kicked them aside.

"We're out in the middle of the water," Jane said through slightly labored breath.

Lee nodded, tucking his hands under her skirt so that he pushed it further up her thighs with his arms.

Omg HOT! Yes I said it your thinking it.

These two no wonder they are mates. I have to say I love that Jane accepted who Lee was right away. And the feelings they feel she accepted him as her mate too.

David is a character alright. I can’t wait to see what’s going to happen in the next book with him and the others.

Jane and the puppy’s comments killed me, I loved that and the way Lee calmed her down.
Loved the narration for this book!

*All my Reviews are 100% honest and my own.*
“This Audiobook was given for an unbiased review via Audiobook Boom.”

16 of 23 people found this review helpful

This is part 2 of a story that I am sure will have other parts. It was very quick and mostly sex. a story was mixed in between the sex scenes but they prevailed.
I was given this book via audiobook boom in exchange for an honest review.

I liked it but just too short!

I was given this book in return for my honest unbiased opinion. I really liked this book but man it just seemed so short...I need more.

Storyline was good but I would have been happier if it was longer. Start was a little confusing but better by the end.
"This audiobook was provided by the author, narrator, or publisher at no cost in exchange for an unbiased review courtesy of Audiobook Blast."