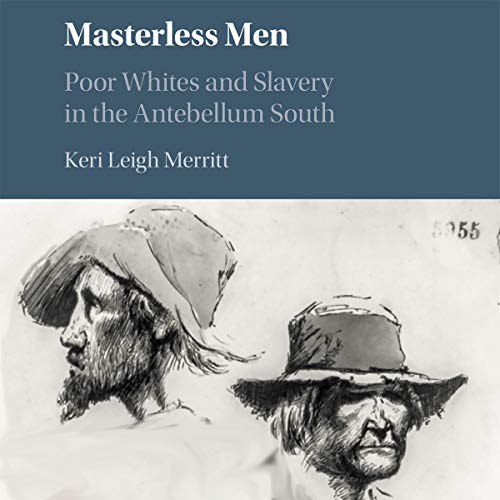 Analyzing land policy, labor, and legal history, Keri Leigh Merritt reveals what happens to excess workers when a capitalist system is predicated on slave labor. With the rising global demand for cotton - and thus, slaves - in the 1840s and 1850s, the need for white laborers in the American South was drastically reduced, creating a large underclass who were unemployed or underemployed. These poor whites could not compete - for jobs or living wages - with profitable slave labor. Though impoverished whites were never subjected to the daily violence and degrading humiliations of racial slavery, they did suffer tangible socioeconomic consequences as a result of living in a slave society.

What listeners say about Masterless Men

Masterless Men illuminates a seldom explored portion of the story of American slavery, and exposes the peculiar institution as one that was not simply aimed at perpetuating one racial class’s oppression of another racial class. Instead it paints the arguably more complete picture of American slavery as a system whereby both slaves of African or African American descent and so-called poor or middling class whites were exploited so that members of the planter class could secure all of their labor at below market wages or no wage at all.

If more people were acquainted with this part of the story, one can’t help but wonder how it would impact modern-day debates about wage and labor rights.

I had listened to Nancy Isenberg's book-"White Trash: A 400 Year History of Class In America" and want to explore this topic further.
As a white male who grew up in Texas during the Civil Rights era and hearing the false and romanticized narrative about the South, this book confirmed what I though was true. The anti-bellum South was really an undemocratic oligarchy that needed to be totally destroyed for the true ideals of the American experiment to move forward.
The defeat of the Confederacy started that process, however, the process derailed during Reconstruction and allowed vestiges of the old oligarchy to remain and flourish again through Jim Crow laws and economic and voter suppression.
Knowing my heritage and the economic hardships my ancestors experienced they too were victims of this oppressive system even though racial slavery was more dehumanizing and horrendous.
In fact, this system is taking root again with the rise of the economic, academic, media and political elites present in both political parties.
If an egalitarian and non race based society is something that interest you then this is a must listen.

A class based look at antebellum society

This is an interesting book, and one that I think is long due. This book takes a look at poor white people during the slavery era, and examines how slavery negatively impacted their status. This book enlightened me, I didn't fully understand what it meant when I had seen that emancipation freed both white and black alike. This book helps to explain it. I do feel however, that perhaps it should have started further back. It has been cited by the venerable late historian Edmund S. Morgan that there was a shift from Indentured labor to African Slave labor, and I feel that this should have been cited in this story, as I believe it adds to the overall story of poor whites in the South. Also I feel the book should have done more to elaborate on the role that a career in Overseeing plantations played. It has been cited by former slaves such as Henry Clay Bruce that this was a position this class of men frequently occupied, and relished. Explaining this role would add to the complexities of class in the South, but I feel the author didn't go into it to maintain a more sympathetic view. But overall, I recommend this book for those who want to fully comprehend the damaging effects of slavery.

I found this book informative, but as a history or even a sociological study, I must question some of the conclusions because the data is so sparse.
I especially object to any statement beginning, “they must have thought,” or “must have felt” which is why I subtracted a star
In addition I would seriously suggest skipping the audiobook & going with the written work. This is a 17 hour advertisement for the benefits of professional narration. The author is zealously earnest and emphasizes 2 words in 3. There is no phrasing & many mispronunciations. I kept talking to my iPhone: Indigent, indigent, indigent! Merriam-Webster doesn’t even have an alternate pronunciation.

This is a wonderfully detailed and well-researched exploration of the plight of poor whites and enslaved black people in the antebellum south, the Civil War, and the immediate aftermath of the war. I learned so much more from this book than the sleeping football coach who taught American History to me in high school.