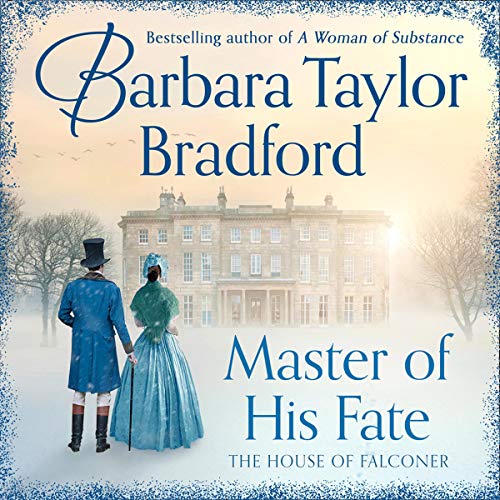 Master of His Fate

By: Barbara Taylor Bradford
Narrated by: Joan Walker
Try for $0.00

The gripping, epic new historical family saga from the author of A Woman of Substance.

From Victorian London to the vibrant port cities of England and France, from gracious stately homes in Gloucestershire to the decadence of Paris, Master of his Fate launches an unforgettable new historical series.

London, 1884: Queen Victoria is Empress of India, and Britain is at its peak of worldwide power.

James Falconer works as a barrow boy in a flourishing London market owned by Henry Malvern. But James hungers for more. Turning away from family tradition, he dreams of building an empire of stores like Fortnum and Mason’s and believes that Henry, along with his daughter and heir Alexis, could offer him a way to climb beyond his beginnings.

But tragedy and betrayal threaten the dreams of both James and Alexis - and jeopardise everything they hold dear....

"A stately home, a dangerous secret and two families whose fates have been intertwined for generations...a gripping period piece set on the brink of the Great War. Exquisite escapism of the highest order." (The Lady)

"A classic saga of loyalty, secrets, passion and intrigue...if you’ve been suffering withdrawal symptoms from Downton, this is for you." (Daily Mail)

What listeners say about Master of His Fate

I have read many of BTB books but never listened to them before. I would not choose to listen again. It was like amateur hour at the local theatre.

Not the greatest literature in the world. long time since I have read any BTB. Writing leaves a lot to be desired but enjoyed it as easy listening. The main problem though was the narrator , who used the most bizarre intonation which spoiled it somewhat. I found her tone and voice really quite irritating.

Very disappointing this one. The story never really got going and it ended quite abruptly.

A good performance but a very slow story

Not the usual standard

It was ok, fairly enjoyable. But def no Woman of substance and not as good as many other novels BTB has written. Just ok. I just didn’t care that much for any characters and it’s all a bit light and brief. Does not live up to blurb

This tale of James and Alexis has the same allure as her earlier epic stories of 19 th century drama. If you are a long standing Taylor Bradford fan this is what you've been wating for.

I can't really tell you what the story was because I kept getting jerked out of it by the hideous narration. It was something like Hyacinth Bouquet being winsome and coquettish and something like my great aunt Millie reading to kindergarten children and promising a really big surprise, won't that be fun children? I would recommend you listen carefully before selecting this to make sure you can handle the truly awfulness of it. My advice.... don't do it.

Beautiful narration- I fell l in love with the Falconer family instantly. Can’t wait for the next book.