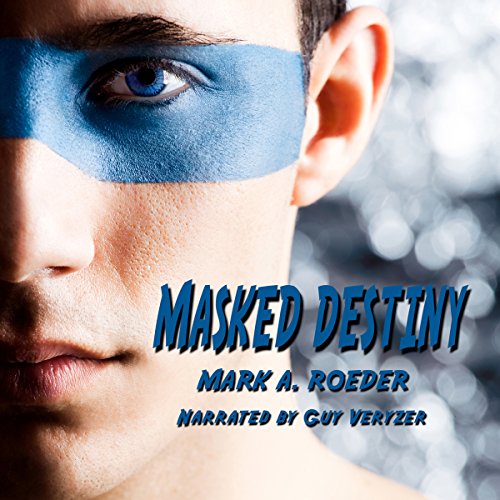 Masked Destiny is the story of Skye, a high school athlete determined to be the Alpha male. Skye's obsessed with his own body, his Abercrombie & Fitch wardrobe, and keeping those around him in their place.

Try as he might, he's unable to ignore the world around him, or the plight of gay boys who cross his path. Too frightened of what others might think, Skye fails to intervene when he could have saved a boy with a single word. The resulting tragedy, wise words from a mysterious blond boy, and a unique opportunity combine to push Skye toward his destiny.

Oliver is young, a bit pudgy, and interested in little more than his books and possibly his first kiss. As he slowly gains courage, he seeks out the friendship of Clay, his dream boy, in hopes they will become more than friends.

Oliver is sought out in turn by Ken, who warns him Clay is not at all what he seems, but Ken, too, has his secrets. Oliver must choose between the two and discovers danger, a link to boys murdered in the recent past, and the answers to secrets he'd never dreamed.

What listeners say about Masked Destiny

well if you enjoy listening to the old pervert from family guy pretend to be a 16 and 14 year old boy, than this books for you!!! I can't believe I even finished it...…….talk about creepy, the narrator constantly made me feel dirty like I was watching some old guy molest some child, WRONG narrator SO WRONG.

Such a great book. So many twists and emotions involved. Loved that it was long!

love the story but the narrator made me fall asleep. He even sounded like he was bored

loved it start to finish. listened to for 2 days had to hear the ending

Talk about a story!!

This story has it all!! Lust, love, murder, hate, deception, jocks, and a surprise at almost every ending! I don't really know of how to describe this story other than There is a super hero in all of us, and every super hero needs a little help now and again. This is a very long book, but believe me, it's well worth waiting til the end. I hope of whoever listens to this book takes away that good will always win over evil! (Devin!)

so wonderful of a story. I only wish I could find that kind of love an wish when I was a teenager I could have had that love. if I had I wouldn't be in the life I am now. yes I want to go to my maker but can't. there is something keeping me here.
Jim Arrowsmith
Salt lake City Utah
arrowsmithjim11@gmail.com

What happened to Hermione?

This was a chore to continue for about half the book. It got better in the last half, but still had issues.
I enjoyed the supernatural aspects to the story, but it seems like they were just peppered into the story to add a modicum of interest.

Hard to judge a book so poorly read

This may be the worst reading I have listened to, worse even than the almost infamous Boy Toy for Christmas. Dreary and slow I came close to making my first return after 20 mins or so but stuck it to the end. The story has a little interest but the writing is laboured and tries too hard with its philosophy and maybe not hard enough with its credibility and dialogue.

another good novel by mark a roeder