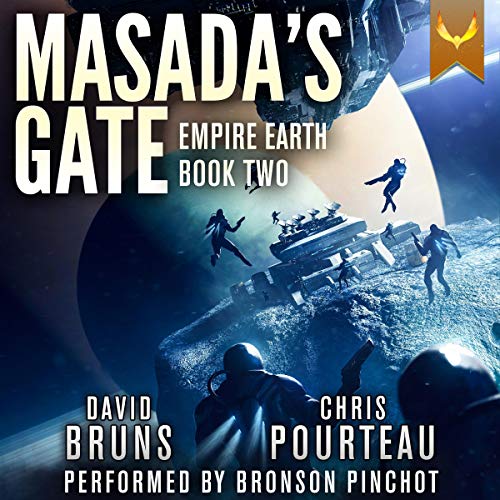 By: Chris Pourteau,David Bruns
Narrated by: Bronson Pinchot
Try for $0.00

The Expanse meets The Godfather in this space opera/sci-fi noir thriller about corporate greed, rebellion, and mankind’s survival among the stars.

The corporate empire is crumbling from within...

SynCorp’s leaders are on the run, and the Soldiers of the Solar Revolution are hot on their trail.

A desperate Ruben Qinlao hides the injured Tony Taulke in the moon’s rundown barrio of Darkside. When the SSR attacks Callisto, Kwazi Jabari is pressed into service as the face of a revolution he soon begins to question. Orbiting Titan, Masada Station holds the Company’s treasure trove of tech secrets, and Cassandra Kisaan pulls out all the stops to secure ultimate victory by stealing them. Only Stacks Fischer, corporate enforcer, stands in her way.

Earth is lost. Mars is under martial law. The outer colonies are the last bastions of Company rule in Sol. And the people...will they stand with Cassandra, who promises freedom? Or with SynCorp, their old taskmaster and the devil they know?

What listeners say about Masada's Gate

This a great second book of The SynCorp Saga: Empire Earth!!! It is a must! The story and narration are outstanding!!!! I love a the surprise that happen! it put a smile on my face and can't wait for the next book in the series!

The corporation is falling apart and it's leaders have fled. Jabari has become the face of the revolution. But soon, it's not even really his face, or his words that are being used to promote the cause. He's not even sure he wants to be a part of it.

This is a good storyline with strong characters and lots of action. I thoroughly enjoyed it, nearly as much as the first book. I really like listening to this narrator, too.

I received a free copy of this audiobook in exchange for my honest opinion.

Sci-fi with a bit of 40's noir. A space pirate , who's part human and part android , tries to take over earth and all her satellites. The jewel in the crown is Masada, a space station on an asteroid, that must be protected at all costs. A lot of action, colorful characters, and a body guard that talks like Phillip Marlow. I was gifted this from the authors.

Stronger than book one, and that’s saying something. I really enjoy Bronson Pinchot’s performance, especially of Stacks Fisher.

Not the greatest of sequels.

If you haven't read the first book in this series, do so now or there will be much you won't follow. I have read the first book; there is a character missing here from a well developed storyline in Book 1 but otherwise the central characters are all here.

Much of this book is concentrated on the SSR's attempts to replace the Corporation. Who are the good guys? That's for you to decide, but the emphasis on this one central theme means that the story does not move on in the way Book 1 did. The door has been left open for a (final) third volume.

Overall, not as good as the first book.

The narrator does a good job in bringing the characters to life.

Straight in, no warm up

In my review for the first book in this trilogy, I mentioned that it took quite a while to warm up to the corporate half of the cast of characters, thankfully none of that this time.

It picks up pretty much where the first left off, the one group of characters having managed to leap out of the frying pan and now having to very carefully avoid the fire as long as possible; no significant gaps in the storyline that then have to be alluded to, or told in flashback, that you find in some multi-volume tales.

For those who've read plenty of trilogies, you'll know that the middle volumes often suffer from just being about setting up pieces on the chess board, ready to all be resolved in the final tome. Whilst there is a certain amount of that in this book, there are a few skirmishes along the way which pay off setups made within this piece and so they're not left hanging at the conclusion.

The "underling" character cast, as I think of them, grow nicely, too, and you should enjoy the surprise towards the end.

This is book two of the series. I begins full bore and keeps on going. There are many times I did not think the characters would survive and when they did it was a real relief. The way that multiple threads are woven together is outstanding also.

The Narrator does a really fantastic job with the voices of the many characters.

This book was provided free of charge with the understanding that an hones review would be done.