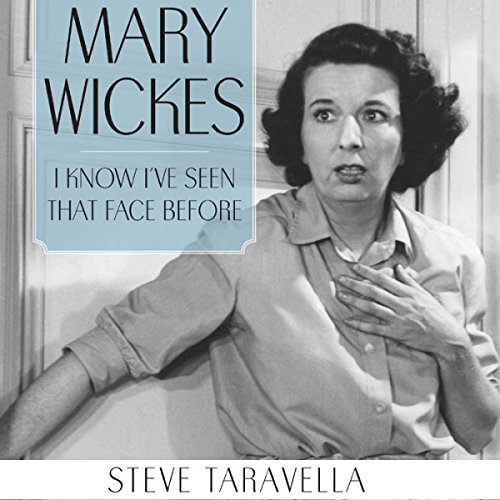 By: Steve Taravella
Narrated by: John McCormick
Try for $0.00

Moviegoers know her as the housekeeper in White Christmas, the nurse in Now, Voyager, and the crotchety choir director in Sister Act. This audiobook, filled with never-published behind-the-scenes stories from Broadway and Hollywood, chronicles the life of a complicated woman who brought an assortment of unforgettable nurses, nuns, and housekeepers to life on screen and stage.

Mary Wickes (1910-1995) was part of some of the most significant moments in film, television, theatre, and radio history. On that frightening night in 1938 when Orson Welles recorded his earth-shattering "War of the Worlds" radio broadcast, Wickes was waiting on another soundstage for him for a rehearsal of Danton's Death, oblivious to the havoc taking place outside. The pinched-face actress who cracked wise by day became a confidante to some of the day's biggest stars by night, including Bette Davis and Doris Day. Bolstered by interviews with almost three hundred people, and by private correspondence from Ball, Davis, Day, and others, Mary Wickes: I Know I've Seen That Face Before includes scores of never-before-shared anecdotes about Hollywood and Broadway. In the process, it introduces listeners to a complex woman who sustained a remarkable career for 60 years.

What listeners say about Mary Wickes

Clunky writing about a private person.

I would recommend this to a Mary Wickes fan. I am a big fan and am glad I listened to it. However, as a book I can't recommend it highly. Mary Wickes was a private person, and lived mostly for her work, and as a result is seems there isn't a lot to write about. A lot was filler about other people in her life that really didn't pertain to her. In addition, the writing was rather clunky and often jumped around in awkward ways.

Was Mary Wickes worth the listening time?

From "the man who came to dinner " to "sister act ", Wickes was one of the greatest character actresses of classic Hollywood. Enjoy!

The author could have summed up her sex life or lack of in a few paragraphs instead of dragging it out. If Mary had or didn't have sex most readers could make their own conclusions without all the old gay actors comments. Other than that the book was a great history bio of her life and career