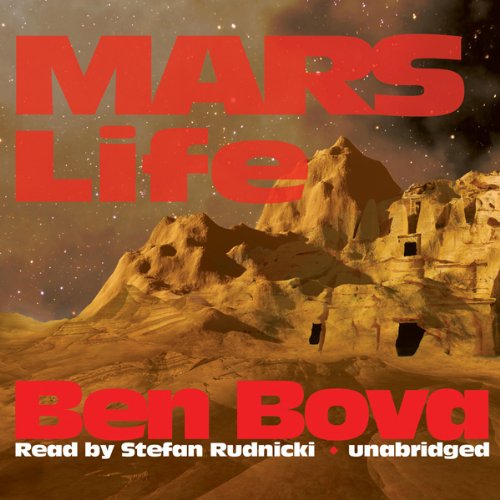 Jamie Waterman has made an important discovery on Mars. A cliff dwelling reveals the fact that an intelligent race lived on the red planet 65 million years ago, only to be driven into extinction by the crash of a giant meteor. But now the exploration of Mars is itself under threat of extinction, as the ultraconservative New Morality movement gains control of the U.S. government and cuts off all funding for the Mars program.

Meanwhile, Carter Carleton, an anthropologist who was driven from his university post by unproven rape charges, has started to dig up the remains of a Martian village. Science and politics clash on two worlds as Jamie desperately tries to save the Mars program and uncover who the vanished Martians were.

"[A] gripping and convincing conclusion....Bova deftly captures the excitement of scientific discovery and planetary exploration. This compelling story, balancing action and plausible political intrigue, will easily be enjoyed by both fans and newcomers." ( Publishers Weekly)
"Another attention-grabbing entry in a series that continues to grow in stature, scope, and complexity. Once again, Bova in top form." ( Kirkus Reviews)

What listeners say about Mars Life

This book is a sci-fi novel with the theme of religion versus science. Science is represented by the planetary explorers of Mars, who are studying the planet after discovery of 60 million year old human-like life. A group of earthly religious fundamentalists has become so politically powerful that it can determine the outcome of elections. New Morality leadership sees the archeological work being done on Mars as a threat to its core religious beliefs--it wants the project shut down. I believe it's obvious that Bova sees the religious movement as a fanatic fringe; he even states that when religious movements become too powerful, conflict results. Lots of conflict in the book, but the resolution seems like an afterthought. The book just sort of ends, leaving the reader to wonder what the result might be...the epilogue gives a clue. I liked the book. It was exciting--makes one think.

Start At The Beginning Of This Series

Based on this installment in the Mars series, Ben Bova does not do back story very well. If you start here, you will probably find the characters to be paper thin and the story much to do about nothing. If you have the background of the first two stories, it hangs together fairly well.

Still, I was disappointed in this installment of the series. I really enjoyed the first two installments of this series which I have on audio tape and would give them 4.5 to 5 stars. Bova did an excellent job in the first two of creating suspenseful tales about the exploration of Mars, and I listened to them several times. This book seems more a polemic on fundamental Christianity than on the exploration of the solar system. Bova's caricature of Christian belief is over the top. As one of the majority of Christians who do not find conflict between faith and science, I thought his continuing tirade on faith versus science heavy handed and unconvincing (at one point he portrays a young high school student's persecution at the hands of the faithful for wanting to learn about Mars. He stopped just short of portraying Christians drowning kittens.) He did a much better job of finding some balance to the subject in his novel Jupiter (which I heartily recommend). If you have read/listened to the first two, go ahead and pick this one up to see how the saga ends (although you may want to wait for an Audible special). If you haven't read the first two installments, I think you will be disappointed if you start here.

As usual climate amid religion are to blame for everything but it is an interesting story except for some rude and profane language. The religion that is being blamed produced the reasons the people of the United States wanted to include ten amendments in the constitution and later added a few more. The reason religion is being blamed centers on the fact that those ten amendments did not work, and the feeble acceptance that there is God has been firmly chucked out the window. We presently are enjoying that results of that rejection with doom and gloom in the form of its all the fault of religion and the climite is failing stories. Even more interesting is that this has been going on for 60 of my years steadily.

Ben Bova a chosen to politicize.

I am very sad that Bova's more recent works have become a prayer to the political left. His story's in the Grand Tour series make religion of all types, the enemy of science, while the truth is that science for science sake is in itself a religion. In my younger years the works of Bova were my favorite. The Orion Series is spectacular and his earlier works are beautiful masterpieces science fiction. But it appears he has decided to make climate change fanaticism his mantra. I can not recommend these later works of Bova for this reason. I am sorry he has taken this path.

Across the board DUD story. Ben, what happened?

before now a Ben Bova story has never failed me, what a writer. And Stefan, I love that man's voice.
Not even Stefan Rudnicki could save it. Maybe it's me, bad mood, whatever, after 6 tries I give up; six. I moved through the story, tried to find a high point, nothing; so disappointed. Ben Boba, Stefan Rudnicki, a remarkable combination; a winner! Nope! a story with all of the fascination of the alphabet. High Hopes, and money spent; so disappointed.
My advice, move on, trust in Ben Bova, but move on.

Mars should be part of the curriculum!

Christian fundamentalists have attempted over the centuries to destroy science. They must be stopped. I agree with Ben Bova's exposure of the dangers of allowing our primary schools and universities to be censored by these self serving simpletons. Separation of Church and State is fundamental to the US constitution. This story is an effective medium for presenting the effects of permitting that law to slide towards ruin. Humankind must go forward in space exploration and scientific endeavor not backwards to the Dark Ages where such groups as the Spanish Inquisition ruled the human world. Now we have the moral majority, donald trump and right wing fundamentalists to contend with and constrain.

Ben Bova did a great job on this book, some of his best very work.

The performance was weak in my opinion. The performers voice was too deep and a little monotone. when he read the part of the female, it was so forced, it distracted me.

Great realistically written and narrated. I look forward with anticipation to the next in the series.

Ben Bova's vision of the future is 'Good to Go'..!!
I especially enjoyed the Mars series that he wrote.. I have always dreamt about living on Mars and this is about the closet to reality of my imagination...

Loved the continuing story line from Ben, read brilliantly by Stefan Rudnicki. I just so enjoy the the premises of there being life still on Mars just waiting for us to discover

Having read the previous two Mars based stories in Bova's Grand Tour series
as well as a few others and deciding that the Mars books were overall the
best of the series I'd read so far, I decided to read the final book, Mars
Life. Mars Life picks up some 23 years after the events in "Return To Mars"
and features Jamie Waterman, his now wife, VJ and Dex Trumble that we last
met in the previous Mars installment.

Mars has now over 200 scientists working there in a large dome now sited in
the bottom of the canyon adjacent to the structures found in the cliff face
by Waterman in the first book. However, severe funding cuts and attempts by
the New Morality to shut down the mars programme are threatening the future
of Mars exploration and Jamie Waterman has to find a solution.

One of the things I liked in this story was how quickly the reader "got" to
Mars. The reader was back on the surface of the red planet right from the
off and although there was some minor mention of the New Morality this
aspect of the politics that can bloat some stories was minimal and thus
welcome.

Bova didn't fall into the trap of describing technologies that dated the
story as he had done in his first Mars book although his sense of what's
fashionable does hark back to the 70's where I think Bova is still stuck in
to some extent. Negative racial attitudes show its face in a few minor
instances which I always found rather odd amongst supposedly the highest
calibre scientists. Thankfully, apart from one character there wasn't the
usual wanting to get this or that person into bed narrative that peppers
Bova's books and which I find just an annoying and rather silly inclusion.
The odd reference to "slacks" are mentioned which as other readers of my
Bova reviews will know is something I find terribly dated and yet Bova still
clings to this term for some reason.

The key characters are well defined and fit well into the story and the
narrative was well paced I thought. I liked the story overall and I felt it
did place the reader on the surface of this distant world and certainly made
me want a manned mission to the mysterious red world to happen sooner as I
feel sure that mars has a lot of secrets to reveal. I liked Bova's theory of
life and how it might have become extinct and think that it's even plausible
too.

Mars Life left me wanting more and I hope that Bova revisits the red world
sometime soon as this story leaves us in no doubt that there are many more
stories from Mars that are possible.

I would recommend this book and although it read as a stand alone story, I
do suggest that the other books Mars and Return to Mars be read first to get
the most out of this novel.

I liked all Ben Bova's Mars novels. I thought they were all plausible predictions of the exploration of the red planet. This is an excellent last chapter in the series. I just wish there was another book to read as this was very enjoyable.