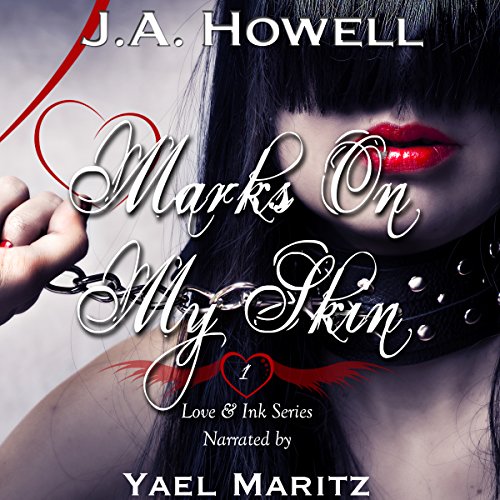 Marks on My Skin

Marks on My Skin

Not for listeners under the age of 18. Contains language, explicit sex, and adult situations.

Kieran Donovan has always been a doormat to the women in his life. Begging his wife not to leave after finding her in bed with not one - but five men - only provides further proof of that.

In need of an escape from an empty house and a broken heart, Kieran heads to Midtown to see his estranged brother, Liam. There he meets Shayne Wickham, Liam’s best friend. Shayne’s dark and sexy with a wild streak a mile long and a sexual appetite for things Kieran’s never even dreamed of doing. But after an intense, and all too brief encounter, he’s more than willing to learn. Despite the usual safeguards Shayne keeps around herself and her own wounded heart, she finds herself more than willing to show him the ropes…and the floggers…and the paddles.

Kieran’s never seen himself as dominant in any aspect of his life. But when Shayne submits herself to him, it ignites an inner strength and hunger he never knew he had - and feelings Shayne didn’t know she could have. So used to keeping others at an arm’s length, the ease with which she finds herself trusting Kieran is both exciting and unsettling. Could Kieran be someone she could finally trust her heart to - or will he leave her scarred like everyone else?

MARKS ON MY SKIN is the first book in the Love and Ink series. I believe they will each stand on their own with crossover characters, but you can never be sure after just one book.

I loved the character development in this story. Kieran especially grew… as in he finally grew some balls. The man went from begging a whoring wife to keep him to being a Dom for Shayne. Who would you respect more? I know who I choose.

Besides hot sexy, there was a ton of funny that had me laughing so hard that my stomach felt like I had done extra sit-ups!

I enjoyed the story, but the heavy accents on the audiobook were distracting at times. Oh well, it just meant I had to back up and listen to some parts again to be sure I caught a few words.

I would love to listen to more of this series to find out who pairs up with Liam, Niall, and (especially) Darren.

Note: while I was given this book as a gifted copy, my opinions are my own and are given freely.

If you could sum up Marks on My Skin in three words, what would they be?

Which character – as performed by Yael Maritz – was your favorite?

NIall-he seems very funny and easy going. She portrayed him well and had me laughing.

Would you consider the audio edition of Marks on My Skin to be better than the print version?

Kendall! Bwahahaha, just kidding! Seriously, this is a tough question. I love both Shayne and Kieran. I wanted to punch both of them at times, but then I wanted to kiss them the next minute. They were both hurting and needed the other, but kept fighting it.

What does Yael Maritz bring to the story that you wouldn’t experience if you just read the book?

The accent! OMG, that accent. She sounds much better than the one in my head. Her voice is amazing.

When Shayne opened up to Kieran about her past. Also, when Kieran said that what happened in New York didn't change the way he felt about Shayne. See why I love these two??

The lube scene! I thought I laughed hard while reading that scene. I cried while listening to it! Literally had tears running down my face from laughing so hard!
And hearing the scenes between Kieran, Shayne and Darren was just, wow! Both of them were sizzling hot! Especially the one in Darren's office. I needed a cold shower after that one!

I gave it an hour....maybe this book turned out to be good maybe it didn't but the narrator ruined it!

It wasn't the non-American story line that made me stop listening it was the absurd ping ponging in my brain of trying to figure out who was talking, especially when sometimes the "girl" who just had an American accent all of a sudden is saying "Feck" in full Irish Accent, while she is in Scotland! UGH!!!! I'm done...the story had hope but I just can't do it any more.