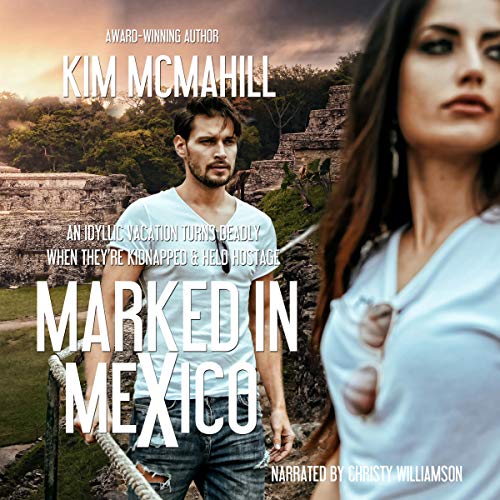 By: Kim McMahill
Narrated by: Christy Williamson
Try for $0.00

An idyllic Caribbean vacation turns deadly when hostages are taken at one of Mexico's most popular Mayan ruins. The kidnappers believe the abduction will be a simple way to negotiate the release of a colleague from a Texas prison, but the stakes become much higher when they realize one of their hostages is the daughter of a powerful U.S. Senator and another, an ex-Army Ranger who has no intention of playing by the rules.

After a daring escape the Senator's daughter, Jessica, and the ex-Ranger, Jack, must endure a terrifying manhunt and a desperate fight for survival. While trying to stay alive in the unforgiving jungle they forge a bond that will last a lifetime and find love neither wanted, but both were unable to avoid.

What listeners say about Marked in Mexico

Would you try another book from Kim McMahill and/or Christy Williamson?

Would you ever listen to anything by Kim McMahill again?

Her voice was like fingernails down a blackboard....very annoying and got on my nerves. She had weird vocal tones when reading dialogue.

Did Marked in Mexico inspire you to do anything?

To skip the audio and read it on kindle...cause the reader is horrible and ruins the story.

A different reader would have made the story MUCH better!

Good story of what happens when one is taken as a hostage. The stakes change when it turns political. Well done, the narration of audio add to the story. Given audio for my voluntary review and my honest opinion

Would you listen to Marked in Mexico again? Why?

I would listen to it again, but follow along in the book to keep characters more straight in my mind.

I wish I had followed this story in my ebook, so I could keep the characters more straight. Or taken notes so I would give a better review.

This book is excellent. Couldn't stop listening to it. Lots of twists and turns to keep you guessing with a surprise at the end. Thoroughly enjoyed all the way through