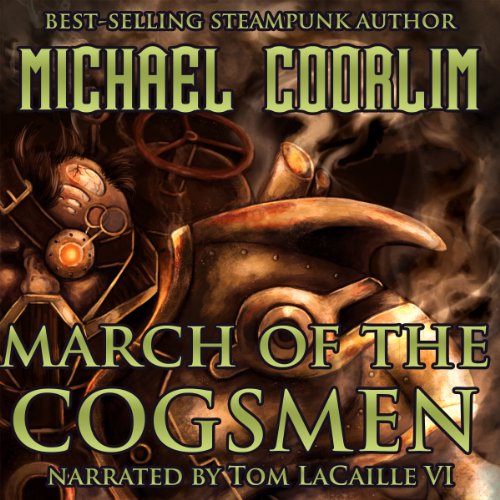 Galvanic Century is set in an alternate steampunk world where the reign of Queen Victoria has extended well into the early 20th century. As the world edges inexorably towards a World War that few can even begin to anticipate, brave men and women must contend with airship pirates, clockwork assassins, galvanic monsters, and anarchist madmen.

It's been a rough year for gentlewoman Aldora Fiske - airship battles above London, doomed expeditions in the jungles of Mexico, and even a kidnapping in Istanbul - and now her bridegroom Alton Bartleby has shown up drunk to their wedding. Yes, it's a marriage of convenience and not one of love, and everyone knows it, but when an old foe decides to strike, things go from bad to worse.

Can the gentlewoman and the consulting detective put aside their differences long enough to defeat their enemy and save the wedding party, or will the massacre turn their nuptials into the social disaster of the season?

Not worth my time

A different narrator probably would have made a big difference

Would you be willing to try another one of Tom LaCaille VI’s performances?

Absolutely not. No emotion. It sounded like someone just reading words. No inflections. I might as well have been listening to him read the dictionary.

The story is only 2 1/2 hours, but I wasn't willing to waste that much time. The story might actually be good. But the narration was flat.