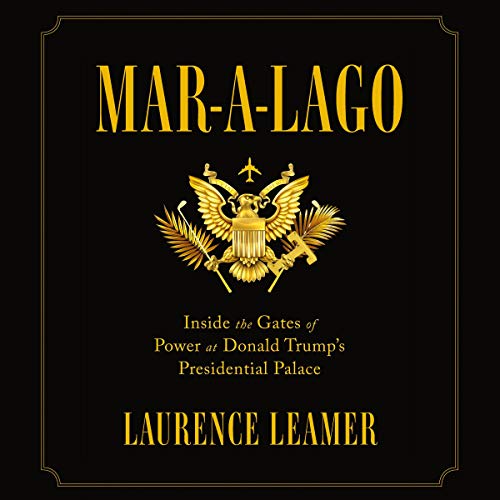 By: Laurence Leamer
Narrated by: Todd McClaren
Try for $0.00

Where Trump learned to rule.

To know Donald J. Trump - to understand what makes the 45th president of the US tick - it is best to start in his natural habitat: Palm Beach, Florida. It is here he learned the techniques that took him all the way to the White House. Painstakingly, over decades, he has created a world in this exclusive tropical enclave and favorite haunt of billionaires where he is not just president but a king. The vehicle for his triumph is Mar-a-Lago, one of the greatest mansions ever built in the US. The inside story of how he became king of Palm Beach - and how Palm Beach continues to be his spiritual home even as president - is rollicking, troubling, and told with unrivaled access and understanding by Laurence Leamer.

Never before has an American president overseen a club where access to him can be bought. In Mar-a-Lago, the listener will learn:

In addition to copious interviews and reporting from inside Mar-a-Lago, Laurence Leamer brings an acute and unparalleled understanding of the society of Palm Beach, where he has lived for 25 years. He has delivered an essential audiobook for understanding Donald Trump’s inner character in the place where he can most be himself.

What listeners say about Mar-a-Lago

Provides insight into the world of Mar-A-Lago and how Trump changed it. Excellent narration also. Easy to listen to so it was a quick listen and very enjoyable.

No surprises but would have liked more

This book simply confirmed what we have all seen from Trump in the White House and through his publicity stunts in the preceding years - to name a few: his "birther controversy," his Access Hollywood debacle, his many infidelities/indiscretions through 3 marriages, and all the other scandals that should make a politician blush. It appeared to be well researched and factual. I would have liked more insight into Melania (she remains an aloof shadow even in this book, so I wonder what life with Trump must really be like - and how has she managed when her two predecessors failed so miserably? Maybe she is making her own book deal? There were some fairly shady deals that seemed substantiated and could possibly explain his "leadership" style, but there was not an overt connection between his invasion of Palm Beach and his invasion of Washington, DC. This book attempted to explain his appeal to his base and who that base might be. Overall, this is one of the better Trump books to come out up to this point. Just got my copy of Andrew McCabe's new book, so, hopefully, new information will make this book even more credible. The case of Trump just continues to be "curiouser and curiouser!"

Interesting Account of Mar A Lago and Palm Beach

As someone immersed in all facets of Real Estate (I flipped my first (small one room) building when I was eight years old) - The purchase of the Mar A Lago estate and its refurbishing was very interesting. Although I am not a political groupie and politicians are socially revolting to me, I gained respect for Trump and how he took honest responsibility for restoring and improving such a parcel of Real Estate and converting it from a liability to a highly beneficial structure place for that community. People all over the world make, break and fold on Real Estate ventures every day all day. Reading about the history of Palm Beach, its culture and structures were fascinating for me. At times, hilarious. This narration was excellent. I did find that Googling people and places in between chapters to find people and buildings was very helpful. The most revolting figure, a gossip columnist. I even searched her Twitter to discover her taking a swipe at a newborn two days old. Yes, the author had been generous in his description of her. Finished reading the book with gratitude that someone in that community, is able to pop out of the herd and relay an account of the social intercourse there, that makes the rest of us grateful to be where are and who we are. A hundred years from now people can read this book and still find an interesting story within, it is a classic.

I was hoping to hate Trump more than I already do and this book did not enhance my loath. Disappointing.

The Narrator's voice was very smooth easy to listen to. Story was well written and informative. It's now part of history

As I was reading, it occurred to me that the story of how Trump acquired Mar-A-Lago was insightful and almost a metaphor for Trump's life and presidency. Fascinating read!

Informative but written by a liberal

Like so much in politics today the author’s reality may not be yours
The author sounded like a liberal so I found myself listening for accuracy as well as facts.
Basically he repeats palm beach gossip-No one likes Trump, yet somehow the club is always busy.
If you can ignore the leftist slant and petty criticisms the book is interesting. The author paints Trump as shallow but I wonder if what is shallow is really the story.

Just so hard to believe this whole family is so corrupt and that there are Americans who still like them (him).

Entertaining story, bound to gain the writer a few invites to parties he was shut out of, and so desperately desires. I am eagerly awaiting the sequel, telling the story of how Democrats enter politics dead broke and become Millionaires overnight.