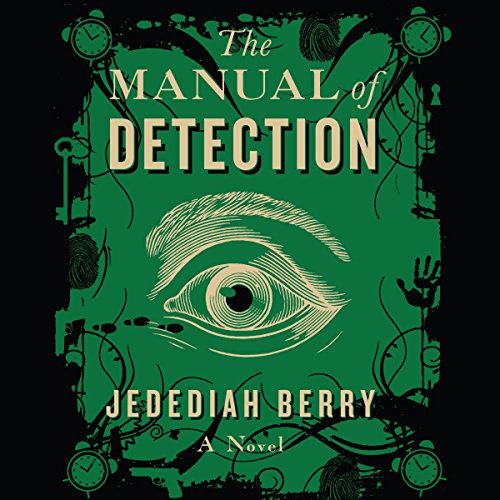 An unlikely detective, armed only with an umbrella and a singular handbook, must solve a string of crimes committed in and through people's dreams.

In an unnamed city slick with rain, Charles Unwin toils as a clerk at an imperious detective agency. His job: writing reports on cases solved by the palindromic Detective Travis Sivart. When Sivart goes missing and his supervisor is murdered, Unwin is promoted to detective, a rank for which he is woefully unprepared. His only guidance comes from his sleepy new assistant and the pithy yet profound Manual of Detection.

Unwin mounts his search for Sivart but soon faces impossible questions: Why does the mummy at the Municipal Museum have modern-day dental work? Where have all the city's alarm clocks gone? Can the man with the blond beard really read his thoughts? Meanwhile, Unwin is framed for murder, pursued by goons, and confounded by a femme fatale. His only choice: to enter the dreams of a murdered man.

this is my 2nd time with this novel and i enjoyed it again.

if you can follow this train of thought you'll have an idea what you're in for: think Ray Bradbury's Death is a Lonely Business (noir) crossed with his Something Wicked This Way Comes (carnival) filtered through P.K. Dick (surrealist reality) written by Douglas Adams (quirky humor) with a touch of Marquez (magical realism) with a heavy dose of Inception (dreams) and maybe a touch of Dark City.

a friend was correct and i had forgotten or listened to this pre-Inception, but there are enough elements in common to make you wonder if Nolan had read this.

this would make a very interesting visually stunning film if done by someone like Nolan or the Eternal Sunshine of the Spotless Mind director.

This is the type of novel that requires you being willing to climb on board and go for a ride. If you are the type that tends to work too hard with these kinds of books, you might not like it.

If you enjoy going for a ride, I found this book a pretty decent listen. I think the narration could have been a bit spicier, but it was fine.

Overall, I liked it. I'll probably read it again in order to just enjoy the story now that I don't have to pay attention to the ride.

This entire book reads like a dark dream. I enjoyed the exploration of the boundaries between our waking and dream states, but the story's “waking state” is a nightmarish world of Orwellian proportions, and the unrelenting air of unreality becomes oppressive. In the end, I couldn't care about what happened to characters who seem nothing more than fleeting figments of a dream. It gave me a headache.

To enjoy this book.

After searching around online, I learned that there is a specific structure to the book that is captured in the formatting of the hard copy. This doesn't transfer over to the audio version very well.

I also found that even after several hours of listening, I still didn't feel like I knew very much about the characters. Character development was done through convoluted action and staccato conversations. The result was that the characters were barely indistinguishable from each other.

I had high hopes since this book was recommended by Nancy Pearl, but I was very disappointing. A fantasy set in a nameless (post?) modern city dominated by a gray 46 floor 'agency', the story has elements of Franz Kafka and the paintings of Rene Magritte (i.e., umbrellas and hats) but the characters are mostly undeveloped blanks and the plot is so full of mysteries that the listener has no idea of what is going on. It is a bit like watching someone work a crossword without seeing the clues: not very satisfying. I finished it because I paid for it, but it is not compelling, rather just the opposite. The reader is good.

I tell people this book...

makes you look at everything with your head slightly askew. Very well-written and certainly not your average story!

Entertaining world constructed for the story.

Took an interesting turn that I did not expect. Very entertaining and original. Enjoyed the characters and atmosphere.

This book tries to be funny

I've got a great sense of humor. I can tell that the author is trying to be absurd and amusing. I can tell that this is an homage to the hard boiled detective. It just isn't funny and not that interesting and I feel that a credit was wasted that could have been better spent else where. Maybe it is true, as one review stated, that it does not translate well from text to spoken word. In that case buy the book but don't buy the audio version.

What an enjoyable and challenging read. This novel was a delight to listen to, and I hope to hear more from Jedediah Berry. A lot of fun. Just how speculative fiction should be.

Excellent, quirky & fun to listen to

Others have said that this book is overly complex, but I didn't find it to be so at all. Try reading The Big Sleep!
The characters are fun, and each one has hidden depths and details to them. The flavor of the book is a combo of noir, pulp, and dream theory. It is imaginative and the reader is excited to find their way around this rain soaked and unusual world.